For today, I planned a visit to a still working gold mine for the very morning and continuing my way towards Alaska on the Top-of-the-World Highway for the afternoon. Since I had to be at the tour office at 8 am already, I had to get up early. I still wanted to get my shower on the campground since it’s not that often that I have a chance for that. I even skipped breakfast to not loose too much time and not having to get up even earlier.

Shortly before 8 am, I arrived at the tour office. The guy there – another one than the one I talked to yesterday – sold me the ticket. A few minutes later, one of his colleagues and the tour guide for today showed up. And there was the surprise and disappointment: The tour guide was the same young lady who was doing the tour on the dredge yesterday and who was quite unfriendly. In addition it looked like as if I was the only one going on the tour – puhh, that would become a tough one. Well, I had bought the ticket already and anyways wanted to go on that tour. So I just decided to make the best out of it and fight unfriendliness with even more friendliness from my side. In case I would become too tough, I wanted to just ask her what kind of harm I did to her that she was so unfriendly with me.

Eventually, we got into the tour van and drove to the mine. That was about a half an hour ride and my guide simply did not talk to me at all. She hardly answered my questions and after two or three attempts to do some kind of conversation, I simply stopped and waited for what would happen at the mine.

Arriving there, my guide explained me a bit about the digging techniques at the current location where they worked this summer. In fact, the work had already been stopped for the season, so I could just see the digging area and the equipment sitting around silently. This was not exactly what I had expected, but well, sometimes those surprises happen.

One stop further, my guide explained me the recent version of a tumble used for separating the gold from the rocks and mud. Basically, it still works the same way as on the dredges, just much smaller. Today, they use excavators for digging and the tumble is a separated machine of about the size of two or three washing machines.

Another stop further, we entered an old house that was originally a shelter for the people working out here many days in a row without returning to the city. It was now some kind of a museum where they showed stuff that had been found while mining. Those were an old shoe, some technical equipment, and even – the most interesting one – two teeth of a mammut. My guide also explained me on a map how the claiming of territory works for gold mining. Actually, she seemed to wake up a bit and was not that unfriendly anymore as before. The territory claiming is really an interesting story: Basically anyone of any nationality can just come out here, find some unclaimed spot, do some analysis and claim property on it for mining. He would then return to the city, pay an administration fee of 10 bugs and get the right to mine for gold there. Once gold is found, the state gets two percent of the winning. As long as you continue mining on a certain territory, you have the exclusive right to do so. You just cannot build anything on that territory, but while mining you can bring a trailer home or whatever has got wheels to live in. This entire system seems so weired in the eyes of a European or even a German where everything is regulated and you cannot even change the color of your house’s roof without a permission.

The last stop of the tour was actually the most interesting one: I had the chance to pan for gold myself. It turned to be much more difficult than one might think even though the idea is simple: You use three elements, water, gravity, and agitation to separate the gold flakes from the dirt. Eventually you find tiny little flakes of gold of the size of much less than the head of a pin. With three attempts and help of my guide in the final steps of the work, I managed to get three of those little gold flakes. Even though the price of gold had raised enormously since the time of the gold rush, those finding won’t make me rich unfortunately.

This was anyways an interesting discussion I had with my guide before: Since I realized that she is herself involved in gold mining out here, I asked her how much is usually found or has been found during the past season. I just wanted to get an idea of the return of investment. Without actually answering my question, she explained me that this is the wrong way of thinking. In her opinion, the first think you have to understand for beeing able to survive the searching for gold is the system of randomness. You might find some valuable amount of gold one day and then go on mining for four years without finding anything. She explained the character of a gold miner as a mixture of a farmer and a gambler: The farmer’s outcome highly depends on nature, one storm, one harsh winter can destroy the entire year’s harvest. And the miner is also a gamber since he’s taking an enormous risk just to eventually become rich.

After that final stop, we returned to the city. There my guide simple dropped me in front of the office with a harsh “have a good day” and went away. Well, you can’t change people – some simply have their character. I spent some time, using the public washroom, filling up my water supplies, and trying to shop around for souvenirs – there was actually nothing I liked – and finally made my way to the ferry crossing the Yukon river for going onto the Top-of-the-World Highway.

Again, the road condition of that highway was much better than I expected from the fact that I was actually not supposed to drive it with my rental car. The road climbed up the hill and once I was finally all the way up, it indeed valued its name: It winded its way ontop of the mountains with occassionally almost bottomless drops on each side. Driving up there was indeed an experience since you felt like “god” overview the entire earth below you. However, having been on the Dempster Highway, after a while of driving, I did not seem that special to me anymore. The landscape was basically always the same – there was much more change of it on the Dempster Highway. The only change here was from forest to almost no trees above the tree line. Still, it was a beautiful drive and again the unlimited landscape going on all the way to the horizon and even further was incredible. As a European used to everyting being quite close this is the actual attraction of Canada. 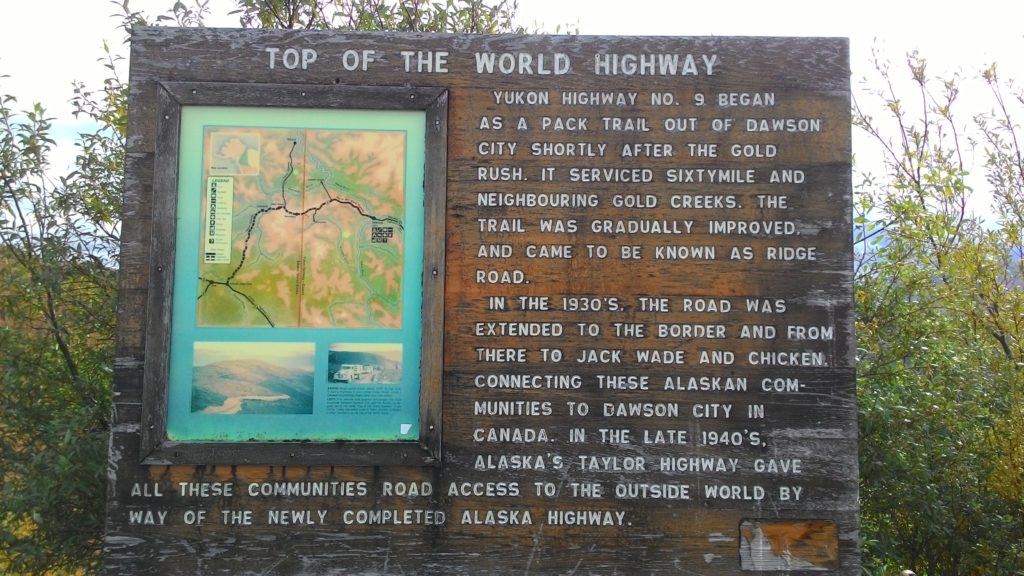 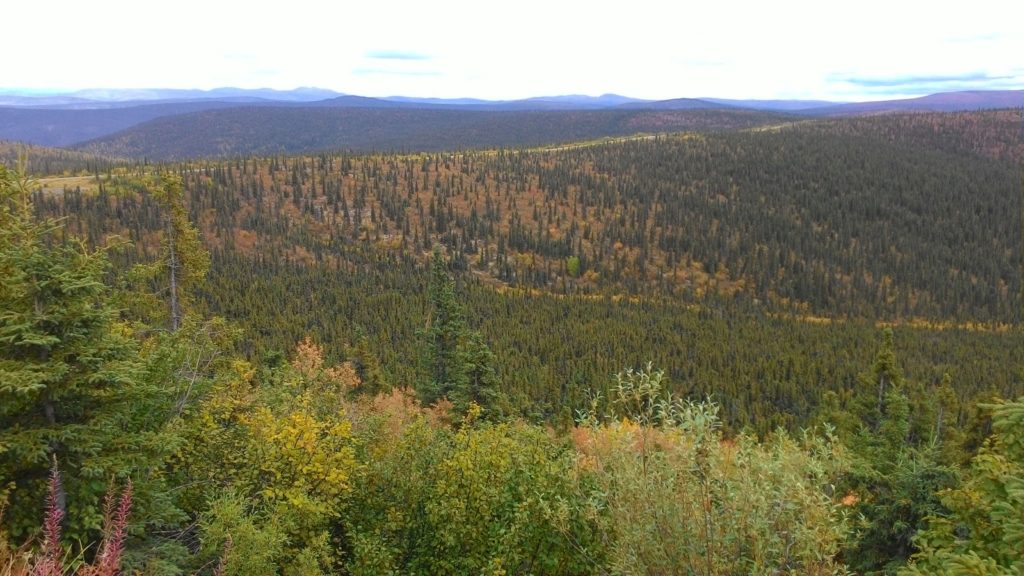 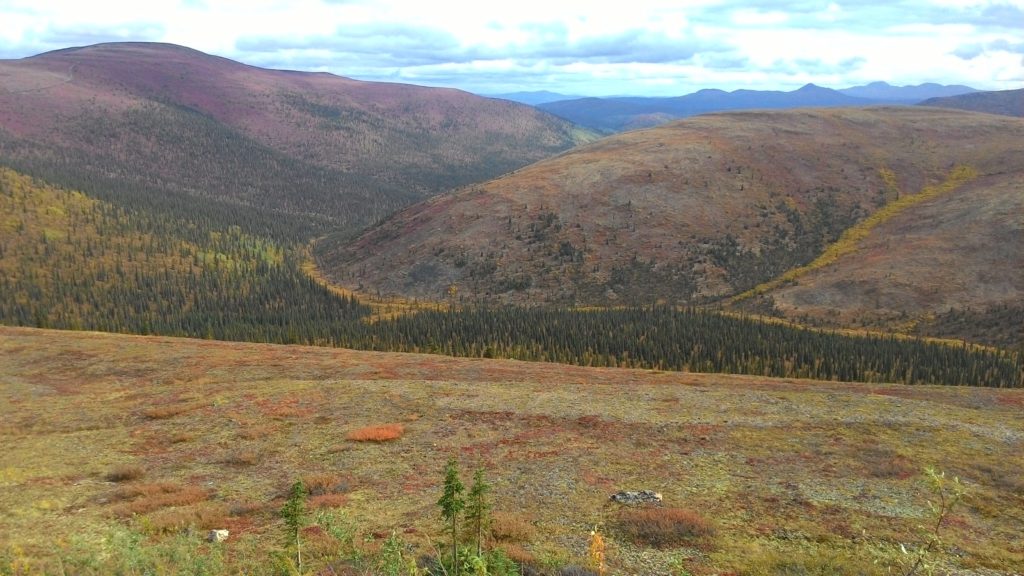 I stopped a couple of times to take pictures of course and even for having lunch. I anyways had to get rid of my remaining nectarine since any kind of fruit is prohibited for taking into the U.S. Eventually, I reached the U.S. border control and passed it quite easily. I just had to show the papers of the rental car and answer the usual questions: Where have you been before? Where are you heading to? When do you leave the country again? Do you bring any tobaco, arms or fruits? Then I was in Alaska again.

I continued driving all the way to the small village of Chicken which was basically nothing more than a gas station, two coffee shops, the famous Chicken LooLoo and also the famous Chicken sculpture of which I of course had to take some pictures. I even entered two souvenir shops but there was just the same stuff as everywhere – well of course adapted to Alaska here. 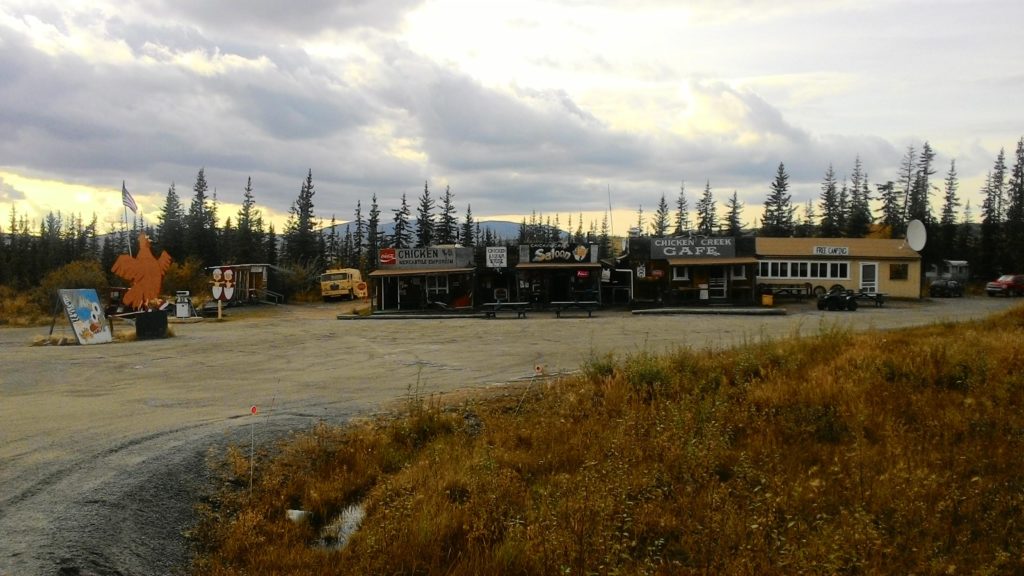 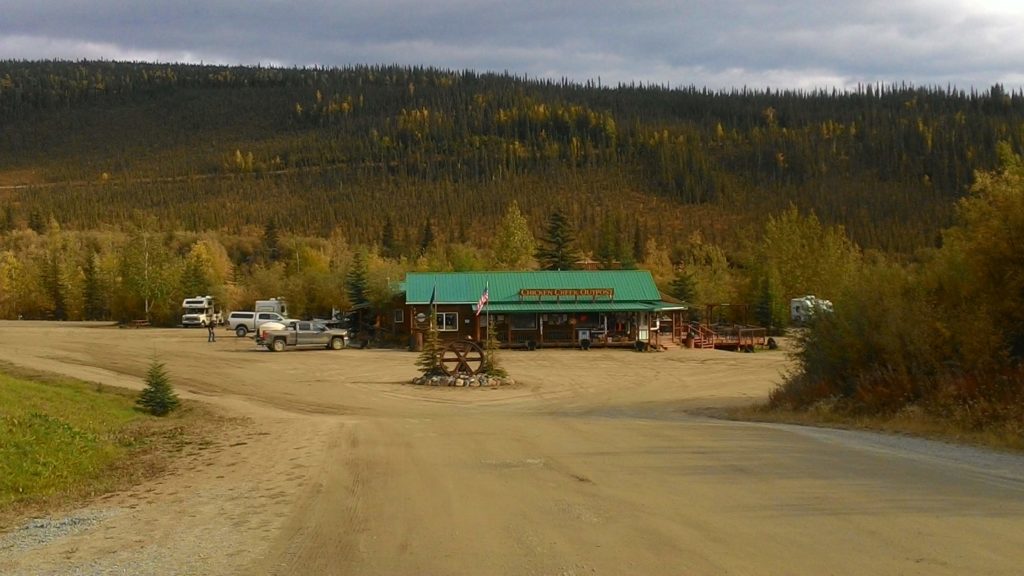 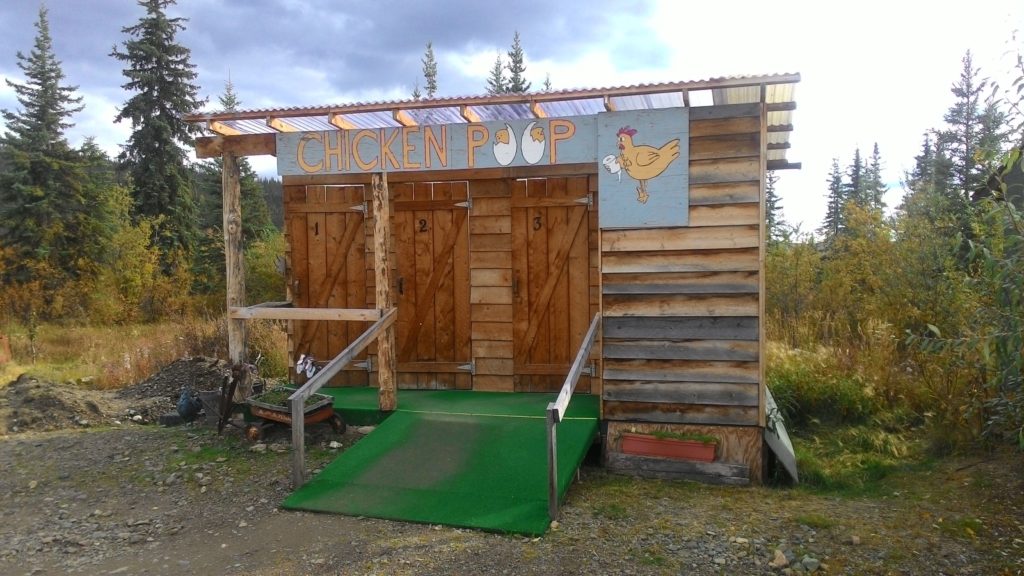 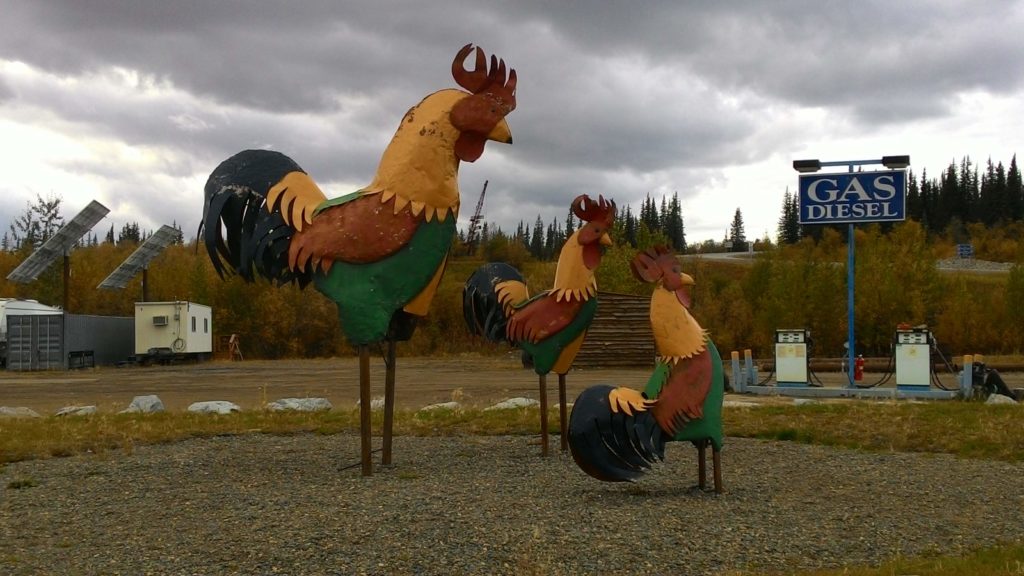 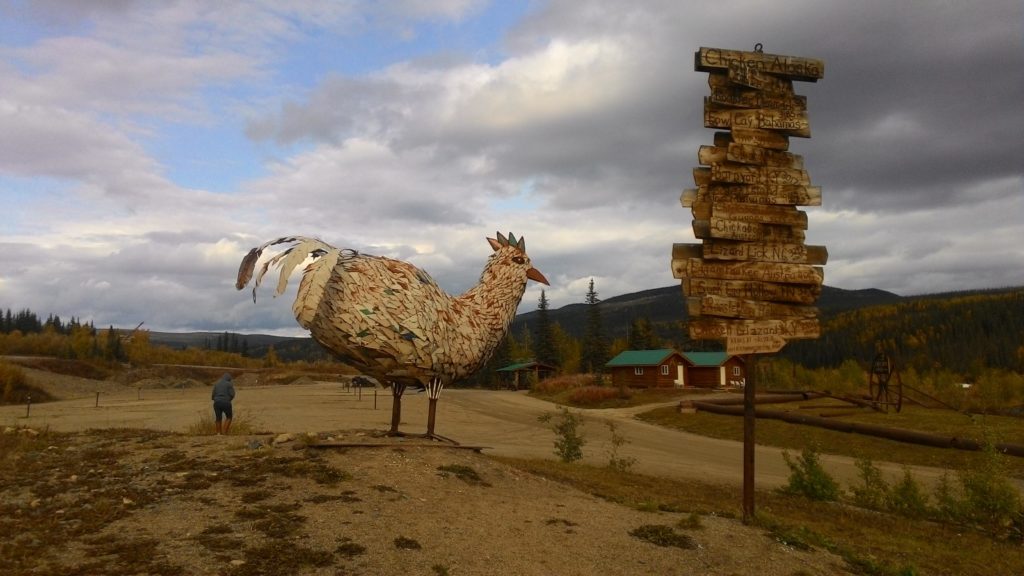 After that short pit stop in Chicken, I continued driving on the Taylor Highway which winded its way through a valley first and went then through a high plateau. Actually, driving on this high plateau was almost more spectacular than on the Top-of-the-World Highway. With all the plans changing their colors and especially the afternoon sunlight, I partially had the feeling of driving through a huge sea of gold. It was just awesome! And again, it was going on forever… 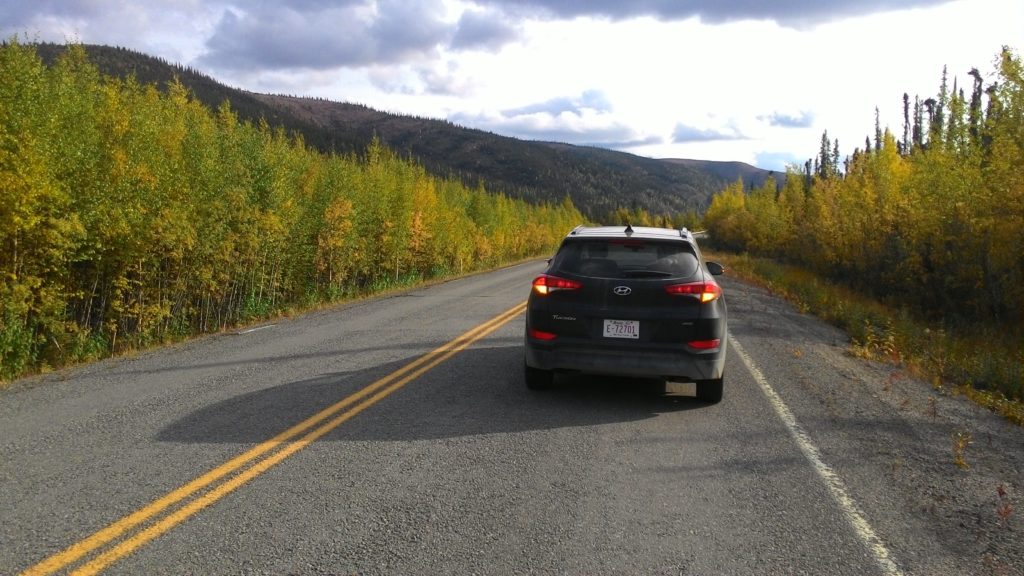 In the early evening, I arrived at the junction of the Taylor Highway with the Alaska Highway. Since gas is much cheaper here in the U.S. I turned right first even though the direction back into Canada was left. I went the 20 kilometers to Tok, a small town mainly existing for filling up supplies and staying the night when being on your way on the Alaska Highway towards Fairbanks and Anchorage. I filled up there and returned right away to continue driving back to Canada and Beaver Creek.

Since it was already late and I had been driving quite a long time already, I did not really know if I would really cross the border today. So some tens of kilometers before arriving at the border, I was looking for a place to stay the night. Eventually, I found a pullout which was quite nicely located – and of course already used by another RV. I did not care and simply parked my car some meters away of that RV. The pullout was wide enough – as everything is much bigger here in North America. Then I prepared myself dinner and enjoyed it sitting in the back of my car. I actually realized that I can sit in there leaving the trunk open – I just had to clean the back bumper a bit for not getting dirty everytime entering and leaving my “living room”.

One thought on “On the Top of the World”