Today, my plan was to enter Canada and on the same day leave it again into the town of Haines. So after breakfast, I drove the remaining few kilometers to the Canadian border. Entering was as easy as at the border control between Hyder and Stewart: Just the usual questions and that was it. The international border is marked here by an alley that has been cut into the forest and some markers and information boards. For me as a German this way of marking the border in the landscape appears a bit weired for historic reasons… but of course the idea is a completely different one here. 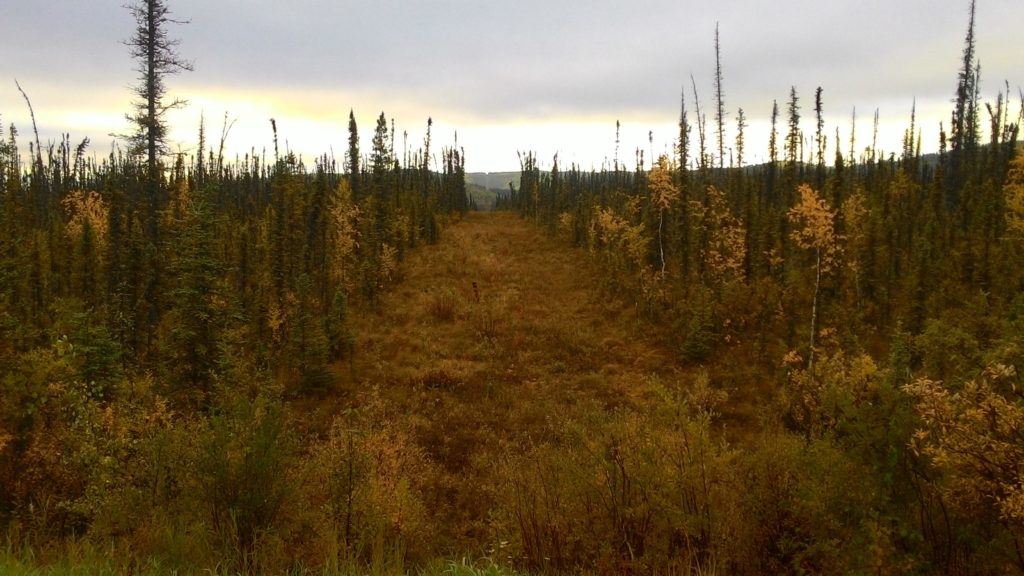 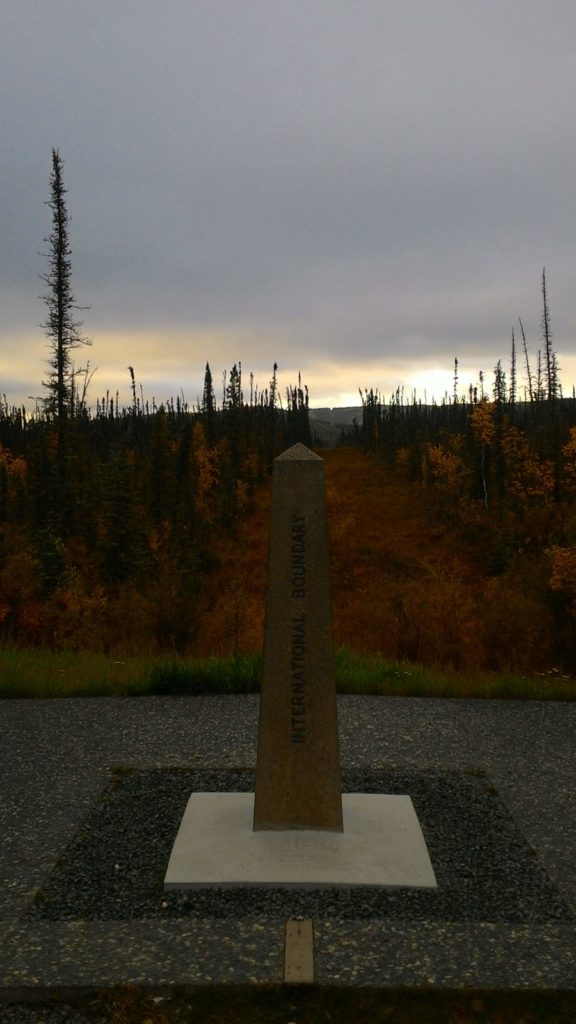 I continued driving towards Haines Junction and actually this journey through along the base of the Elias Mountains was probably one of the most scenic drives of my entire roadtrip. There were the omnipresent yellowish color of the transforming plants, some lakes, and behind everything the partially snow capped mountains. It was just awesome and I stopped a couple of times for taking pictures. The drive to Haines Junction should have taken about three and a half hours – I was on my way for at least five and a half because of all the stopping for pictures. 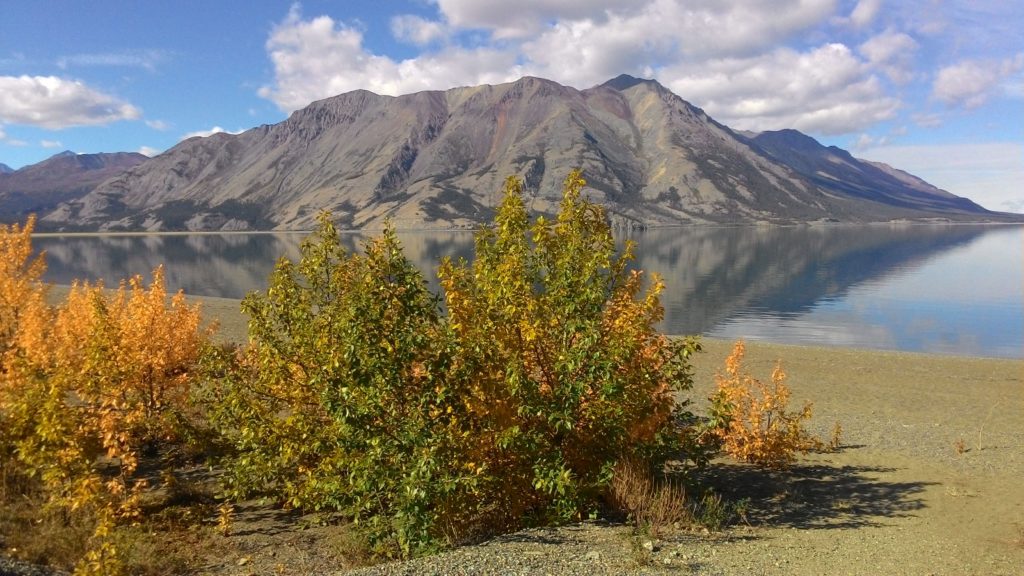 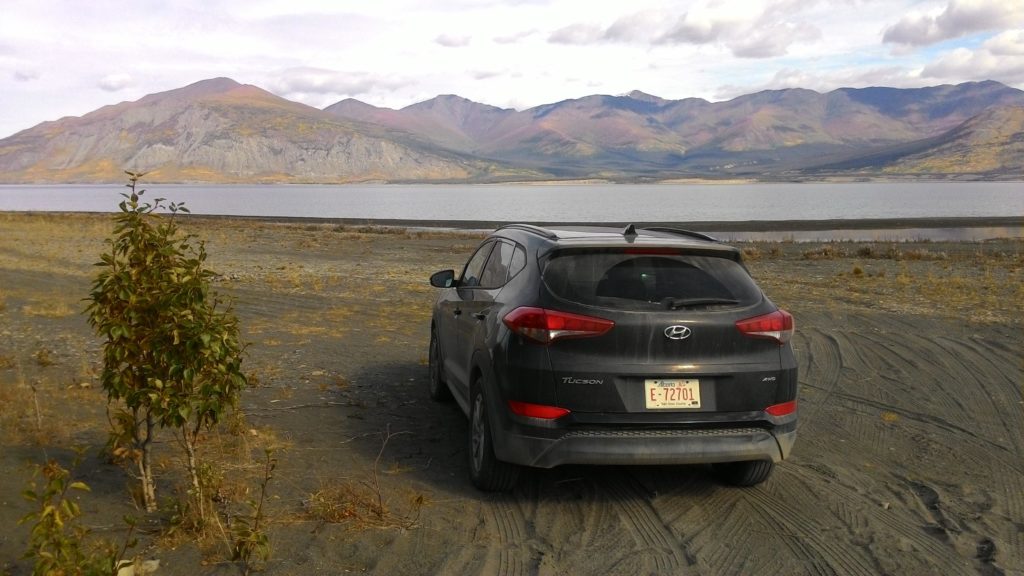 Finally, I reached Haines Junction. There, I checked the condition of the Haines Highway in the visitors center and went on towards the border to the U.S. again. On the way, I stopped at the Rock Glacier hiking trail and climed up the hill which was once a glacier. The short hike was quite difficult, but from up there I had a wonderful view over the entire area with the lake and the mountains reflecting in it. I met a German couple and we exchanged some experiences made here in Canada. 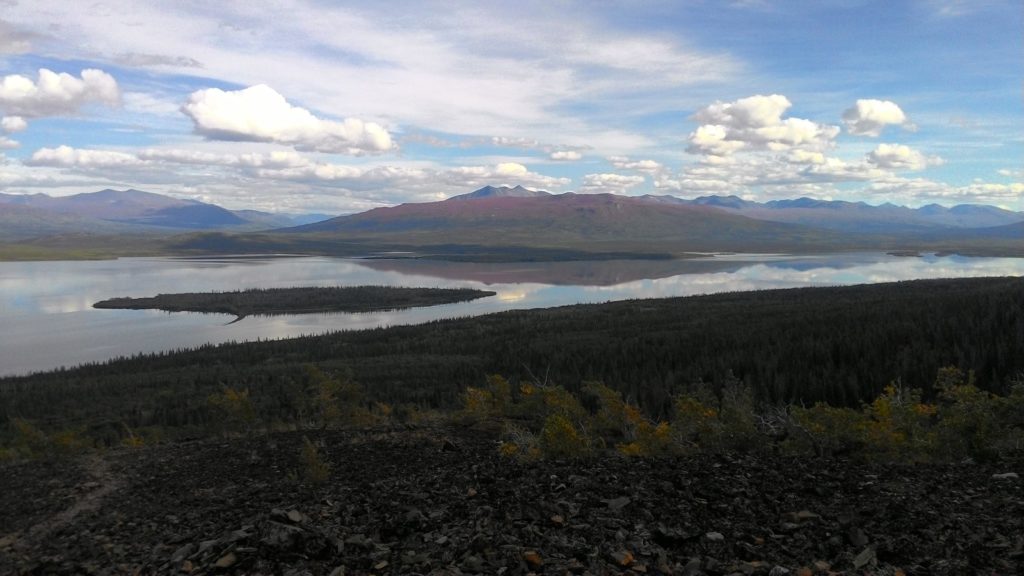 The second stop was for the Million Dollar Falls which were quite nice little waterfalls. A short trail led from the campground to the falls and a platform above them. It was nothing that special, but since no reasonable detour was necessary to see the falls, I simply took the chance.

My further way led me more and more into the mountains which form the natural border between Canada and one of the most southern tips of Alaska, where the towns of Haines and Skagway are located. The road slowly but steadily climed up and eventually reached a high plateau surrounded by the mountains. That was perfect for trying some panorama shots with the smartphone from a perfect location: Standing in the car, head out of the opened car roof ;-). 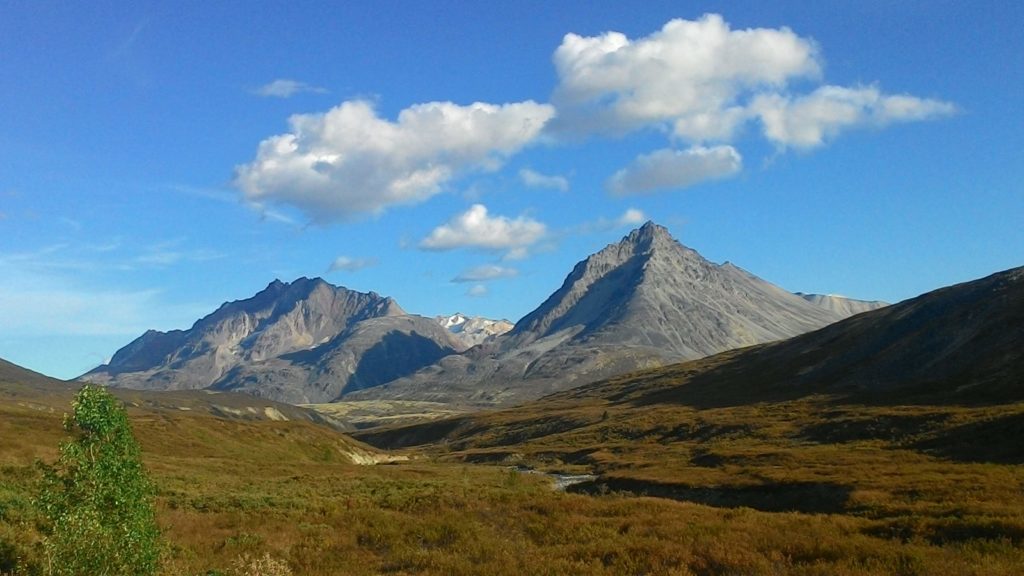 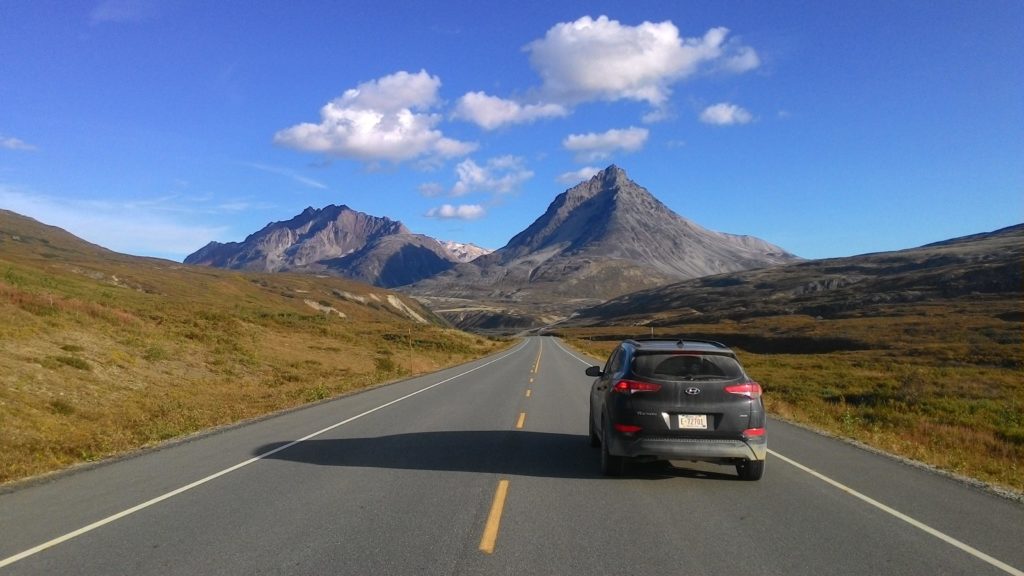 In the meantime it became late and since I had been driving a lot today already, I was really thinking about crossing the border to Alaska or leave that for tomorrow. Shortly before sunset, I reached two awesome spots on hills within the high plateau which I first of all just passed. But I noticed two campers sitting right on top of those hills and people enjoying the view from up there. One of those campers looked quite strange and I became curious…

So a few seconds down the road, I turned around and returned to that hill where I had seen the strange camper. I myself drove up the hill and realized that the camper looked like a wooden house sitting on a small truck. Two eldery persons were sitting in front of that camper chatting with two other people who had obviously also stopped for the strange looking of the camper. I approached the group and got into the conversation within seconds. A few minutes later, the other visitors left and drove on and I stayed there talking to the elderly man. I asked him about his camper and that was the beginning of a series of stories he had to tell.

His name was John and he had been living in sailboats and self-built campers like that one together with his second wife for almost 40 years. They had raised their kids virtually on the road, homeschooling them while being on their way through a sheer countless number of countries. John told me that one of their daughter has stamps of about 50 different countries in her passports! He told me stories about the different trips they were doing. In the beginning backpacking, then on their own sailboat and finally in those self-built campers. They live in Homer, Alaska but in the winter travel down to Mexico in their camper. And that was where they were currently heading – but definitely on their own pace: The journey from Homer, Alaska to here had taken them already more than a month since they travel about 60 miles a day and simply enjoy their time to the maximum.

When I asked John how he pays for all that, he explained me that he had been a contractor and made a good portion of money with that. He then invested that money at the stock market and – according to his own words – became quite rich. Since they does not spend a lot while living on the road, he can live of that money quite well together with his wife.

While telling me all those stories, John prepared a steak on a small outdoor grill attached to his vehicle. In the meantime, his wife was preparing the rest of the dinner indoors. Once dinner was ready, John excused himself for some time and invited me to join them later in their vehicle for watching some videos of their trips. While on the road, they process their videos and pictures of their entire life and produce short video clips of about one hour length. I was of course curious and so the decision of whether to cross the border today or not was made: I would stay here and spend the night in the car just next to my new friends. 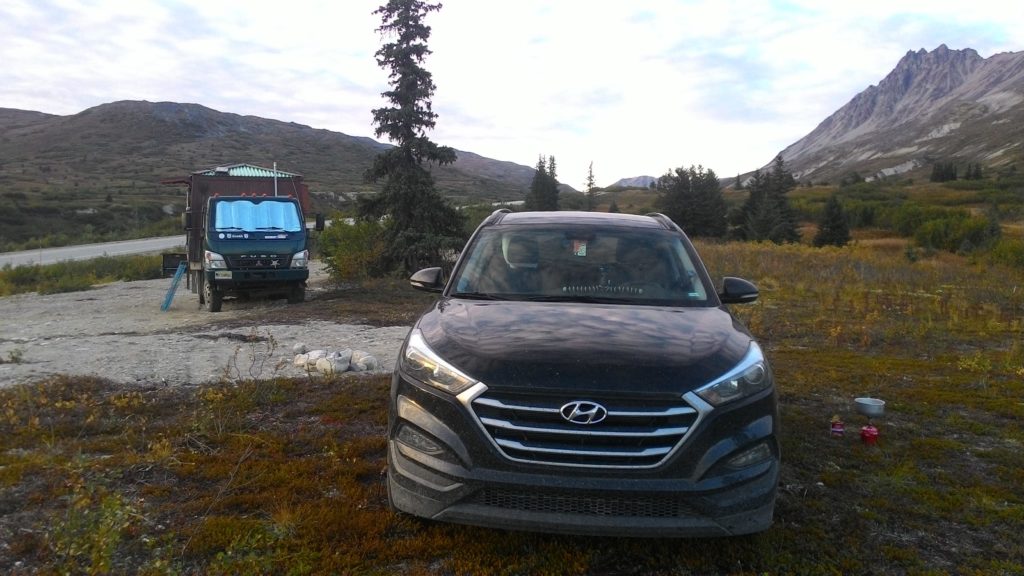 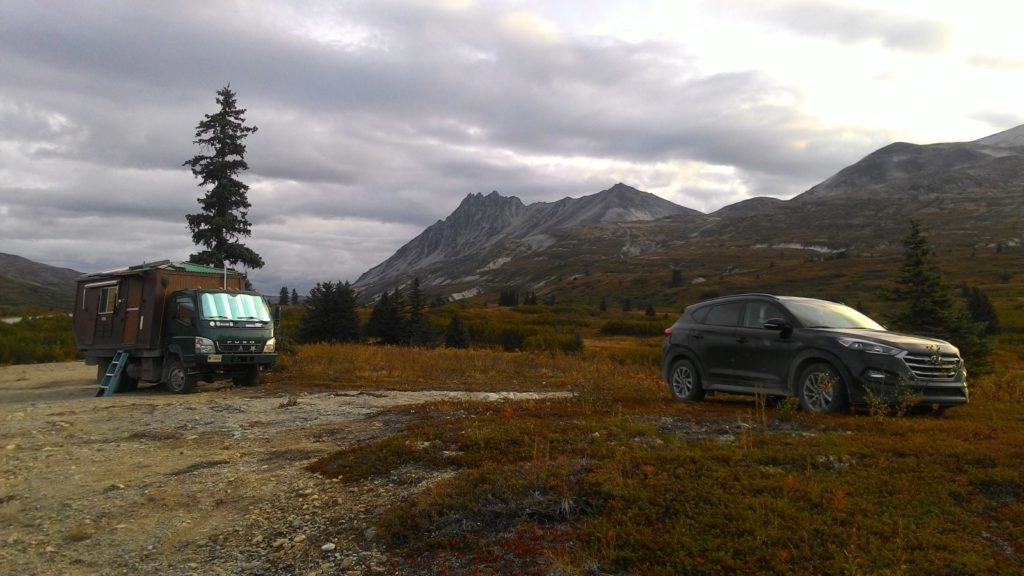 While John and his wife Linda were having dinner, I had my own dinner in my car. Once John and Linda were ready, he came over and invited me to join them. The interior of their vehicle was amazing. Everything was nicely decorated and organized. They even had a TV and a DVD player built into the wooden cuboard on one side of their bed. John showed me some videos of trips they had made so far and the pictures were really awesome! Really close pictures of animals of all kind, bears, foxes, deer, you name it. And of course pictures of amazing landscapes they had traveled through on their trips. According to John’s own words, they really had been to remote places – and I had no reason to doubt any of those stories!

I spent the entire evening with John and Linda in their camper until about midnight. It was really difficult to say goodbye – especially because John went on and on telling stories about their life and their experiences. And those stories were just so great to listen to that I could hardly find a chance to leave and go over to my own car.

But eventually, I said goodbye – not before having asked for their contact details for keeping in touch. In addition, their were on their way to Haines, too and so we expected to see each other again there tomorrow or the day after. I went over to my car and directly to bed with a head full of stories and the amazing feeling of having met two really interesting characters with an even more interesting life! I could hardly fell asleep with all those stories in my mind and was full of admiration of their courage and happiness they were sending out! This was one of the most amazing encounters I have ever had on my trips so far!

One thought on “An Awesome Encounter”