The plan for today was to drive from Whitehorse all the way to Dawson City, Canada’s largest city in the north and hometone of the Klondike Gold Rush. However, as usual, plans are for changing…

I tried to get started soon, but also enjoyed the advantages of a real full-fledged campground, i.e. a hot shower in the morning, a place to prepare breakfast, and dishwashing facilities. At around 9 am, I was ready to go and shortly drove to Walmart since I had missed some things yesterday. After that, I went back to the Alaska Highway only to turn onto the Klondike Highway a couple of kilometers later. That set me on the way to Dawson City.

Along the highway there’s not that much to see. The journey is quite boring, even though the light of the morning sun and also the always changing flora was beautiful. One might think that the flora should start become less and less until there was nothing than the tundra vegetation. But actually, it was changing from one type of trees to another and back again every few tens of kilometers.

Eventually, the highway hits the Yukon again and after two and a half hours driving, I stopped at the Five Fingers Rapids. I walked the stairways down into the forest and found myself on a trail leading into the forest. Since I had not expected such a trail, I did neither bring proper shoes nor my bear spray. However, I did not want to climb all the stairs up again just to correct my mistake, so I just went on along the trail. It led to the shoreline of the Yukon river just above the Five Finger Rapids. Those are rapids separated by four huge rocks into – you guess it – five streams. These rapids were once much more faster and dangerous and a real threat to the sternwheelers coming along the Yukon river. Eventually, the rapids were aliviated by blasting some rocks away.

After returning back to my car, I wanted to use the benches of the rest area for having lunch. However, a group of Japanese had found their way to the rest area and blocked the only bench and table. I still prepared my salad and enjoyed it sitting in the sun somewhere else. In fact it was a bit early for lunch, but I thought that I might be able to drive through to Dawson City afterwards since I did not expect any worthwhile stop on the way anymore.

I passed Carmarcks, where the Campbell Highway joins going down south to Watson Lake. The journey did not become more appealing, it was just covering distance without any particular aspect to stop for. However, the driving through the remoteness was somehow a great feeling. I started feeling like pushing a frontier further and further into the unknown.

Eventually, I passed the intersection with the Silver Trail. I shortly stopped to get an idea of what that was since I had not read the corresponding section of my guidebook beforehand. After reading it now, I really struggled with myself whether to do the extra driving or not. Finally, I decided to skip it as I anyways was somehow running out of time up here.

I knew that I would pass the junction with the Dempster Highway shortly before reaching Dawson City. That was the highway all the way north to the Arctic Sea. The one, I really wanted to do, but I did not have the time for. The staff in the Watson Lake visitors center had told me that the highway was anyways in a very bad shape this year and was relieving me from the suffering of not having sufficient time. Still, while driving, I was pushing thoughts back and forth through my mind. Could somehow fit at least a part of the famous highway into my travel plans? Maybe the first 80 kilometers up to Toombstone viewpoint as the staff of the visitors center recommended me? Or maybe even a bit further to the arctic circle?

When I finally reached the intersection, I had made up my mind: I wanted to postpone reaching Dawson City for tomorrow and go on the Dempster Highway as far north as still possible during daylight today. The only problem was: I then needed gas. Luckily, there was a gas station at the junction with Dempster Highway. Better don’t ask for the price per liter, but I didn’t care. I filled up and started driving on the Dempster Highway.

My first impression was that the highway was in a much better shape that I had expected from all the horrific stories I’ve read and heard so far. But anyways, I already had that impression that the locals here make a big thing out of this gravel roads and in the end they are not that bad. However, I was just at the beginning of the almost 800 kilometers long highway.

After about an hour and a half, I reached the Toombstone park and the so-called viewpoints. Even though it was quite cloudy, the view was awesome! I had come at exactly the right time: Now at the end of the summer season the leaves turned their color and the entire area seemed to glow in so many different variations of colors one can hardly describe. 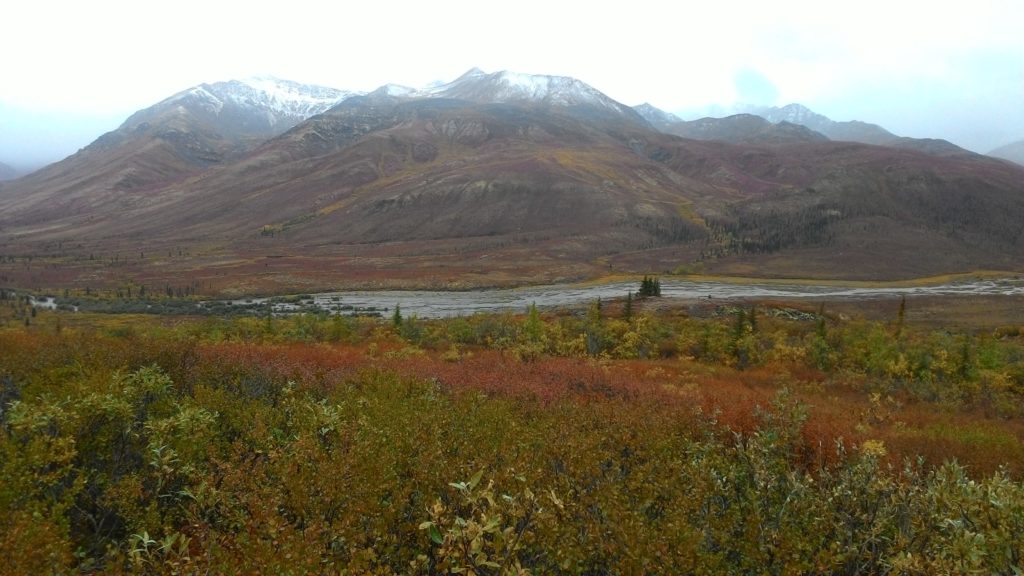 But I still kept to my plan to go on driving. In fact, I knew that I should have a break, but somehow I felt the thrive to push the frontier even further. The feeling of being the only one out here was increasing with every kilometer that I drove further north. Of course, I was not the only one out here. There were a couple of other cars going in the same or opposite direction and some of them were even passing me. And further down the highway, there was even a traffic light at a construction site. However, maybe that is even a sign of remoteness here in Canada since usually, they use two workers in single lane areas to do nothing else than turning a slow/stop sign from one side to the other. Out here, there was nobody, so they had to put a traffice light like we do it in Europe in each and every construction site ;-).

I went on and on … even though I had been driving for almost 10 hours today already, with one break of one hour for lunch. This desire to spend the night at the arctic circle kept me alive. What seemed to be impossible suddenly became realistic and made me go on. I crossed the first plateau and drove into the one beyond. Then the road climbed up again and I reached the Ogilvie Ridge Viewpoint from where I had a beautiful few over the plateau I just crossed and the snow capped mountains beyond. Since there were two other RVs parked here obviously staying for the night, I was quickly thinking by myself to do the same and skip the idea with the arctic circle. However, the desire to reach that point was stronger, so I continued driving. 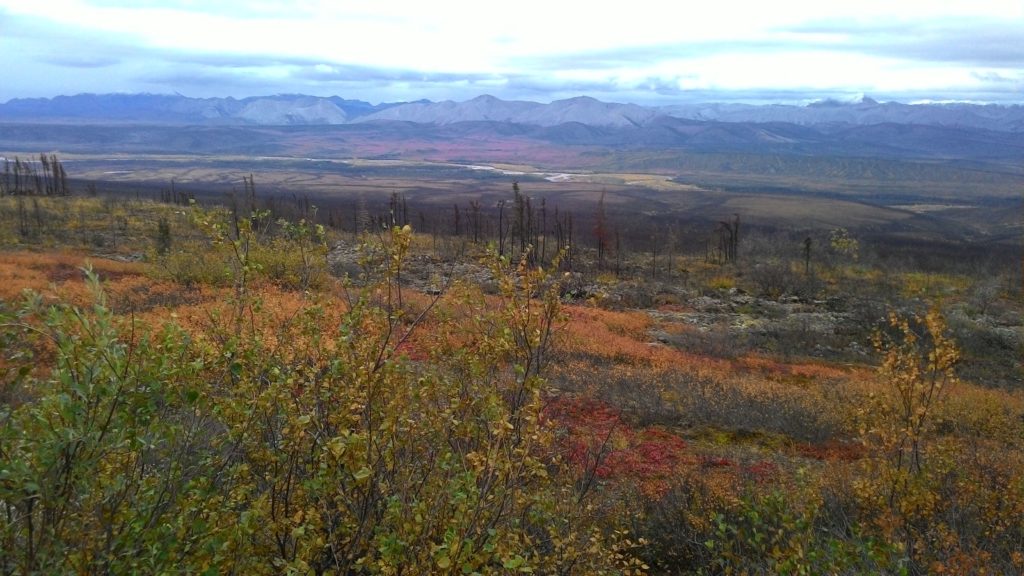 About ten kilometers beyond the viewpoint, the road became quite muddy. It had obviously rained here just a short time ago and from time to time, I felt the car sliding a bit. I became very concerned about the road situation and the possibility that it might rain again in the night making the road impassible tomorrow. After some time shifting thoughts back and forth in my mind, I made the decision to turn around and return to the viewpoint to stay the night there. With that I had burried the idea of reaching the arctic circle on this trip. But somehow, I was too afraid that I may be stuck here with the words of the visitors center staff in Watson Lake in mind.

Still, almost alone out here just about 150 kilometers south of the arctic circle, I felt like pushing the Final Frontier in front of me! I really felt like the chosen one to boldly go where no man has gone before…

3 thoughts on “The Final Frontier”