The ones of you who paid attention might have noticed that there’s a posting missing about that trip to the south of Alberta shown in the map. Well, during my preparations for this road trip back home, I read in the Lonely Planet that there’s a place called Vulcan here in Alberta. Like all the other little towns down here in the south of Alberta, almost nobody would even know about this place – if people there did not have that genius idea of selling their city to tourists as the Star Trek town due to its name Vulcan which is also the name of the home planet of Mr. Spock. When I read about this, I right away decided that I have to go see this place – I mean how can I resist as an old fan of Star Trek?

Driving those approx. 130 km from Calgary to Vulcan was quite easy. Actually, I just had to take highway 2 out of the city and follow it until the junction with highway 23. That was essentially going straight – and I really mean straight (see map) – first eastbound and then a couple of kilometers southbound. It is impossible to imagine how it feels driving those roads when you did not experience it on your own. I litterally set cruise control to 100 kilometers per hour and went all the way to Vulcan without doing anything more then holding the wheel in its position.

Arriving in Vulcan, one can right away see its main – and actually only – attractions: A model of the spaceship enterprise, a huge solar panel construction in some kind of a tree shape, and the visitors center designed to look like a landed spaceship. 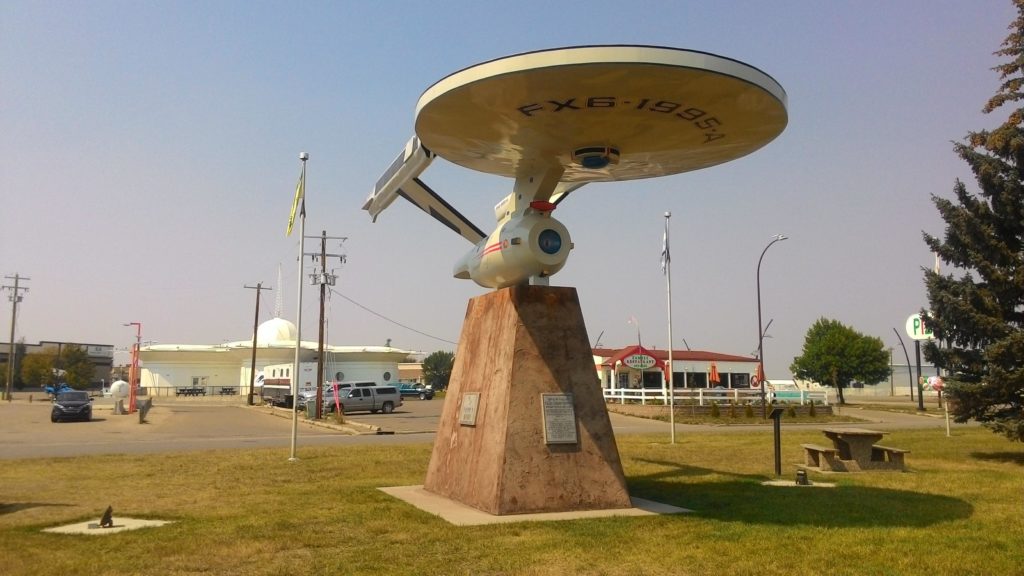 I basically took some pictures, looked around in the visitors center, and talked to the staff there. Then I drove down the center street figuring that there’s really nothing more to see here and went on to the Little Bow Provincial Park recommended by the staff of the visitors center to have lunch there.

However, arriving in the park and trying to prepare lunch, I had to determine that my gas stove again did not work properly. In the morning, I checked it since I already had those problems the day before and it was working well. Now it did not heat up the water sufficiently and so I decided to leave right away again and drive all the way back to Calgary to buy myself a new stove. My plans for this road trip mostly include camping in the car and so I really depend on a working cooking equipment. I really didn’t want to be up there in the Yukon with nothing around me for next hundreds of kilometers and missing working equipment for preparing my meals.

In the downtown branch of the already known Atmosphere store, I eventually found my new travel companion. Since driving back to Calgary changed my plans already, I took the chance of driving a bit through the city figuring that the first impression I got from walking around yesterday was really sufficient. So I drove back to the same campground I was staying on last night and spent there another night.