From the Strathcona Dam Recreation Area, I set off this morning on the road along the Upper Campbell Lake and Buttle Lake. The drive was quite nice especially since I was able to enjoy good weather with blue sky again – the second day in a row already! My plan was to visit the Myra Falls at least and then see where the way would lead me.

On the way, I stopped a couple of times to take pictures of the beautiful scenery around the lakes. I could even see a glacier on the other side of the Buttle Lake and got some of the shots I missed on my entire trip through Canada so far because of the wildfire smoke situation. At the Myra Falls, a short path led down to the falls which I followed and climbed a bit on the rocks around the falls while taking pictures of them. By the way: The ones I’m posting here in the blog are mostly taken with my Smartphone. The real “diamond” ones are hopefully on my camera in RAW format and will be processed after returning back home. 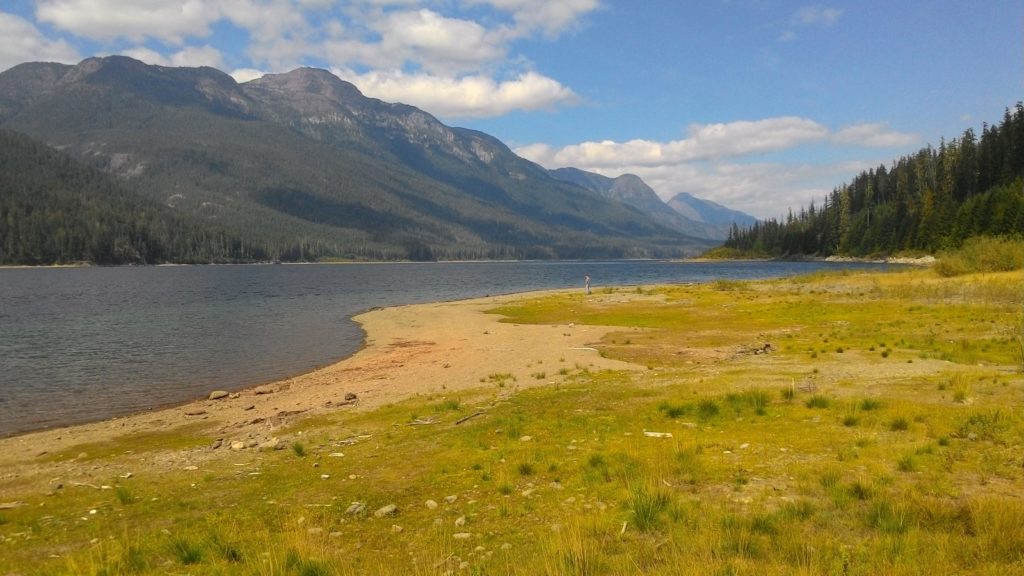 From the Lower Myra Falls, I continued a bit further down the road until I arrived at an information board about the hiking trails in the region. Since for all the trails hiking times of a couple of hours were scheduled, I decided to rather return to the northern tip of Buttle Lake and continue from there down to the town of Gold River. Actually there was no particular reason for visiting that town – I was just somehow curious what was going on there so far into the wilderness and it was just about a 80 km drive which is nothing taking the usual distances here into account.

The highway down to Gold River partially followed the western arm of the Buttle Lake and was also quite nice. Arriving in Gold River, I figured that there was indeed nothing special to see in the town, so I headed further down to the Gold River Water Aerodrome and watched one plane arriving and shortly after departing again. It was obiously bringing mail to the town of Gold River which somehow gave me the feeling of indeed being somewhere in the middle of nowhere.

From the aerodrome, I returned to Gold River and actually wanted to return to Campbell River, but I shortly stopped at the visitors center and noticed an information board about the road down to Tahsis. It declared Tahsis as the origin of British Columbia and advertised the drive down there was very beautiful with even some chance to spot wildlife. I confirmed that information in the visitors center where the attendant even suggested me to stop at the Upala Caves on the way. Those limestone caves can be visited on a self-guided tour. So I decided to give it a try, quickly stopped at the local gas station to replace the obviously bad batteries which I bought in Calgary for my headlight (thank you Walmart in this case), and started driving down to Tahsis.

After about 15 km I arrived at the trailhead to the Upala Caves – at least that was what a sign told me. However, I somehow did not understand that sign first and drove a couple of minutes along a logging road into the wildernis until realizing that something was obviously wrong. Finally, I figured that the trail to the caves was actually a hiking path which started right after the parking lot. As always when walking into the woods, I armed myself with my bear spray and set off towards the caves. I entered all of them for a couple of meters, but when it came to crawl down I was somehow too scared to continue on my own. The information boards explained that you could follow the path through the caves for up to 20 minutes! Of course that sounded like an adventure, but somehow I was simply too scared. After checking the first and main cave, I met some other people on the trail who had done the 20 minutes walk through the main cave and told me that it’s really fun – but it didn’t help: I could not find enough courage to go on my own :-(. 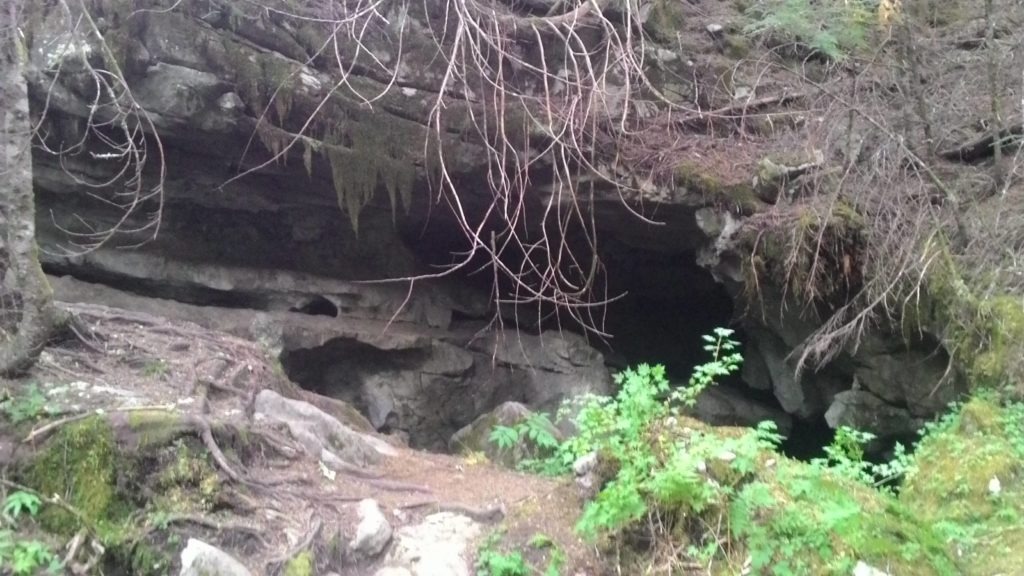 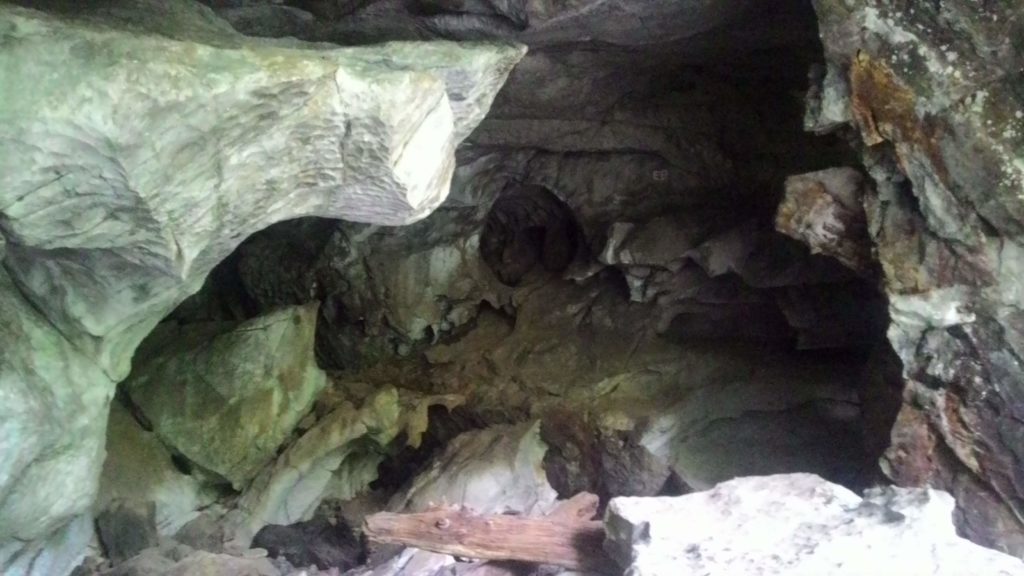 Back to the car, I continued to drive down the road to Tahsis. Since it was already later than calculated, I figured that I would not make it out of the park today, so while driving I tried to identify possible spots for spending the night along the road. I even found a really beautiful spot at a lake about 10 kilometers before Tahsis which became my favorit.

Finally arriving to Tahsis, I drove a bit through the small town and figured that there was nothing special to see here. It was nicely located in the narrow bay, but apart from that it was just a small town. I stopped at the local RV park and asked about the price for staying the night there. However, somehow I did not feel like staying there and set of for leaving Tahsis again. But then I noticed some action going on at a restaurant in the local fishing harbor. There was obviously some party with live country music. I watched the ongoing action for a while but somehow did not feel like joining. There were anyways mainly elderly people… 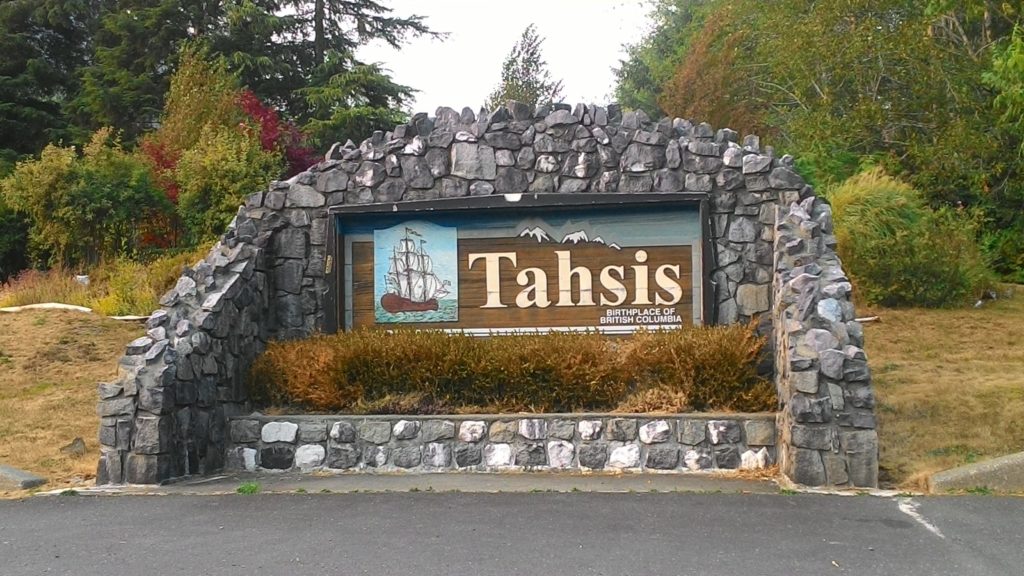 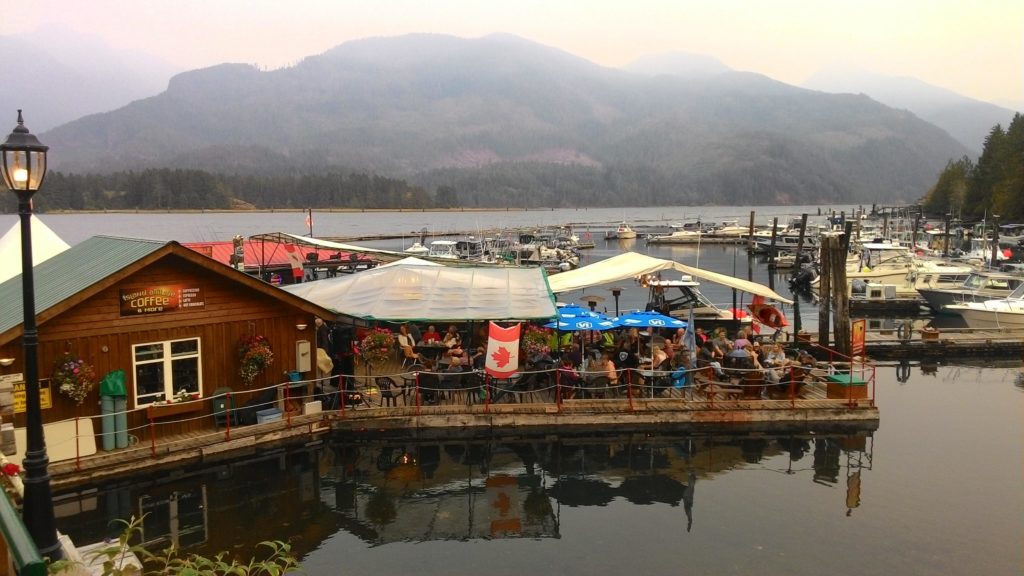 Since I felt hungry, I started my way back to Gold River. My idea was to stop along the way for preparing dinner. After that, I wanted to either continue or catch some sleep and hit the road again very early in the morning. My idea was to hopefully spot wildlife in dusk or dawn. I stopped at the recreation area that I noticed on my way to Tahsis and prepared dinner there. As there was a notice posted at the entrance to the recreation area that a coughar has been seen around there, I did in fact not feel that comfortable being alone there. So after dinner, I went back to the safety of my car and decided to catch some sleep and start the drive back to Gold River and Campbell River respectively early the next morning.