Originally, the plan was to get up really early today to maybe have the chance to spot wildlife in dusk on the way back to Gold River. However, my smartphone resigned its reliable service as an alarm clock and I woke up shortly before 6 am. There was already light, but it was heavily raining. I got myself ready in a few minutes and left the recreation area where I had stayed the night.

Unfortunately, I was not that lucky spotting wildlife on my way back to Gold River – or at least not the ones, I expected like bears. I just saw two deers crossing the street in front of my car and quickly disappearing into the woods. I was not even able to take pictures of them :-(.

On the way back to Campbell River, I just stopped once to have breakfast. In the city, I wanted to find a shower, wash my clothes, and fill up some supplies before driving all the way up to Port Hardy, from where I would take the ferry through the famous Inside Passage tomorrow early in the morning. For the afternoon, I still had the idea of backtracking a bit to the south and visiting Mt. Washington. However, since it was raining, the view would most likely be quite limited. So my idea was to first finish all the “household work” and afterwards decide if it was worth it driving down there or not.

Unfortunately, the search for a shower ended with a clear “No, I’m sorry” when I asked for it at the RV park in Campbell River. I did not expect that since Paola and I were quite easily able to use the showers of a campground in Toronto after staying a night in the car. Well, I had to rely once more to my “friend” Walmart and use their washrooms instead of having a real shower. In the same shot, I also filled up my supplies and afterwards went to a coin laundry to wash my clothes. There, I even met a girl from Germany, identifying her as being from the “Schwabenland” when she was on the phone. Since she was on the phone the entire time, we did not have the chance to do some small-talk, so I did not get to know what she was doing in Canada and Campbell River respectively.

Once my clothes were ready, I decided to give Mt. Washington a try. The weather had cleared up a bit, but I still did not expect a really good view from up there. But somehow, I wanted to try it and so I just did it. That’s actually, the thing I like on roadtrips: You just go wherever you want to go. No shopping for tickets, no schedules, almost no limits that keep you from doing whatever you want!

During the drive up to Mt. Washington, I actually passed through the clouds. But there was still another layer on top of those, so the view from the base station of the cable car was quite limited. I could see the top of the mountain in the clouds and asking in a local mountain bike shop, I got the confirmation that there’s almost not view from atop. So I decided not to climb up there or take the cable car, but to visit the nearby Forbidden Plateau and walk a bit on the hiking paths there. Those were mentioned in my travel guide as a highlight of Vancouver Island.

I walked along the boardwalk of the Paradise Meadow Loop trail for about an hour. That loop is actually just a quite small part of the entire network of hiking paths up there – almost all of them along wooden boardwalks. Some of the boardwalks were even prepared for disabled persons, which I appreciated a lot as a very consequent form of a “barrier free” mindset. The walk up there was nice, but also nothing that spectacular. But I can imagine that the hikes might be much more appealing in good weather conditions.

After finishing the short walk, it was already turning 5 pm. It was time for me to leave and get myself going towards Port Hardy. After leaving the region of Mt. Washington, I followed the Trans-Canadian-Highway all the way to the north of Vancouver Island. Up to Campbell River it was a two-lane highway, but beyond the city it became way less frequented and with each kilometer the feeling of going into the wilderness increased. The past days, I have quite often been to remote areas on Vancouver Island already. Loosing the cell phone signal was nothing special to me anymore. But somehow this time, it felt different: The highway was just going on and on through forest and from reading my travel guides, I figured that there would not be much up there in Port Hardy either. And then there was the feeling that I would even continue traveling into the wilderness by ferry. It was actually a strange, but very good feeling somehow marking a cut between my past journey through the west of Canada and the upcoming journey through the more remote regions of the country.

I arrived to Port Hardy shortly after dawn. First of all, I checked out the ferry terminal and figured that there were some cars and RV already lined up obivously planning to spend the night there. For curiosity reasons, I drove the almost 5 kilometers to the city of Port Hardy, but as already imagined, there was nothing to see there – especially not at night. 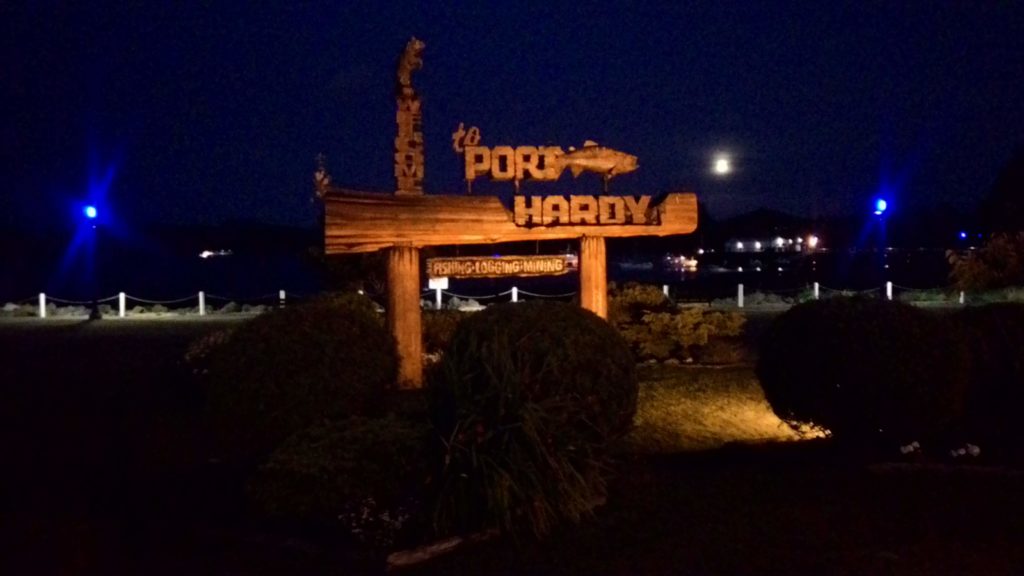 So I returned to the ferry terminal and got to know that I could already check-in for my ferry ride. In addition, I was told that I had to pay 23 dollars for staying overnight at the ferry dock. What a mean form of capitalism! Well at least there were quite nice washrooms provided. I prepared myself a salad for dinner and afterwards got myself ready for catching some sleep. The boarding for the ferry ride would start at around 6 am the next morning.