Oh yes, I know, I’m quite behind with my blog. But I’m trying to catch up now…

I slept quite well the first time camping in the wilderness. The next morning, I prepared myself the usual breakfast – oakmeal with banana and dried fruits – and afterwards made my way back to the highway 3A which winds its way up north along the Kootenay lake.

On the way, I stopped a couple of times to take pictures. Unfortunately, the vision was also limited here due to the smoke of the wildfires. However, I still enjoyed the drive along the lake and finally made it to Crawford Bay, a small accumulation of houses and shops of local handicraft. One of them was quite interesting:

Believe it or not, but here, in the middle of the Canadian nowhere, most of the brooms for the quidditch games in the movie Harry Potter have been made. In the shop they explained how they are making those brooms up to now and there were also some interesting details given about their contract work for the set of Harry Potter.

After that short stop in Crawford Bay, it was just a couple of minutes more to drive up to Kootenay Bay where I boarded to ferry to Balfour. The crossing took 35 minutes and according to one of my guidebooks it is the longest free ferry ride in North America!

Arriving in Balfour, I first stopped at a local supermarket to get myself a salad for lunch. Then I headed further on the highway 31 along the north coast of the westarm of the Kootenay lake towards the town of Nelson. In between, I stopped for lunch which I enjoyed in a quite pleasant area: 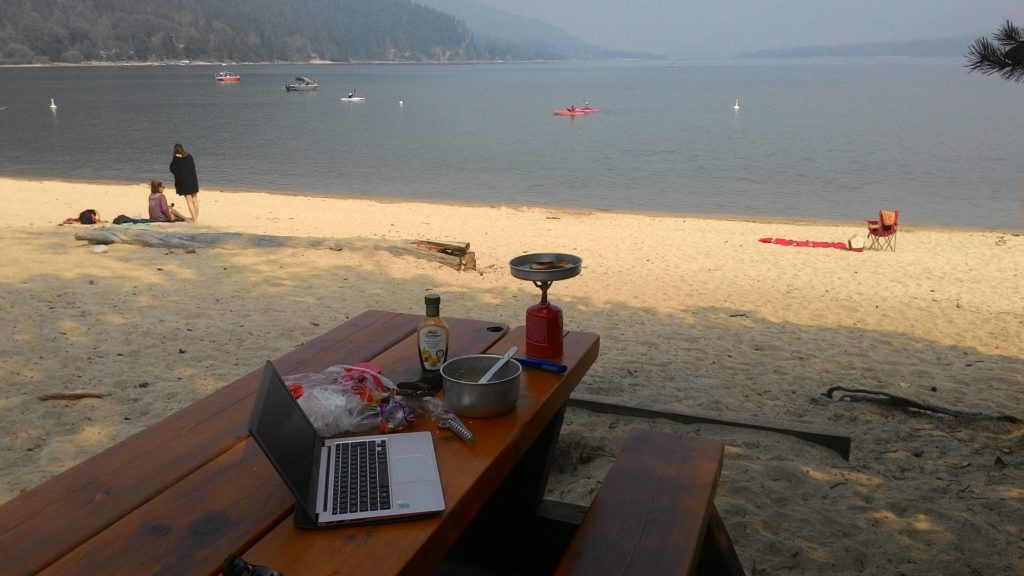 Who actually wants to have lunch in an air-conditioned hotel saloon if it can be in such a setting?

I spent quite a while here on the beach and even met two German girls who where visiting their cousin here. They came from Ulm quite close to the region where I was growing up. We chattet a little about the area, the wildfires, and traveling and then they went their way. I worked a bit on my blog and finally continued on my way to Nelson.

Nelson itself is a nice little town which I explored wandering down the main street and quickly stopping within the park. But then, I continued on my way as it was already late and I wanted to find a real campground today. I wanted to have a shower available in the next morning after the camping in the wilderness the last night. In the visitors center of Nelson, they recommended me to head to the Karibu Park Cottages close to the town of Winlaw. That said, I hit the road again…

Arriving at the Karibu Park Cottages, there was nobody in the office for doing the registration. However, the front door of the office was laced with notes about how to proceed in this case – only that all of them were kind of contradictory. However, I tried all means and eventually followed the note to just pick a site and do the registration later. On the neighboring site, I met a couple of “Hippies” who where traveling with their “Hippie Bus” since May this year. They told me that the owners of the campground were kind of easy going, so it should be fine to come back to them later. I chattet a bit with them and then set myself up on my site. Then I left a note at the door of the office and used the WiFi in a little pavilion – actually the only place on the campground with at least less mosquitos, and there were quite a lot of them around! During the entire process of searching for the campground owners, I caught already a significant number of bites and decided to buy myself a mosquito repellent as soon as possible.

However, this evening, I used the WiFi quite a while until it became dark. Eventually, the owners of the campground showed up and I made my registration. For dinner it was too late when I actually realized it and so I just went to bed in my car.