I did actually not sleep that well on the ferry dock since there was always some action going on: Car doors being opened and closed, people walking around an shouting. But anyways, I had to get up early since at around 5:30 am the action for boarding already started. Of course, it still took a while, until I was allowed to board, but the loading officers were already checking the cars and scheduling the order of boarding.

At around 6:30 am it was my turn to board the ferry. There, I parked my car and tried to get up to the passenger deck as quickly as possible to find a good seat just in front of the windows in one of the passenger seating areas. Of course, for the Aurora lounge directly in front of the ferry, you had to pay extra. I saved that money which turned to be a good decision since I would anyways be out on the sun deck almost the entire time of the journey. 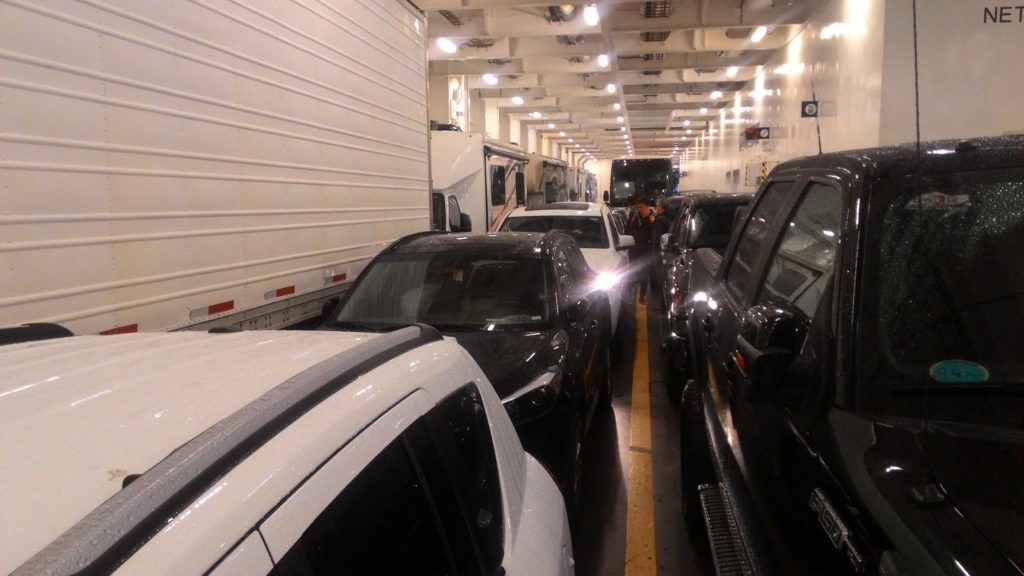 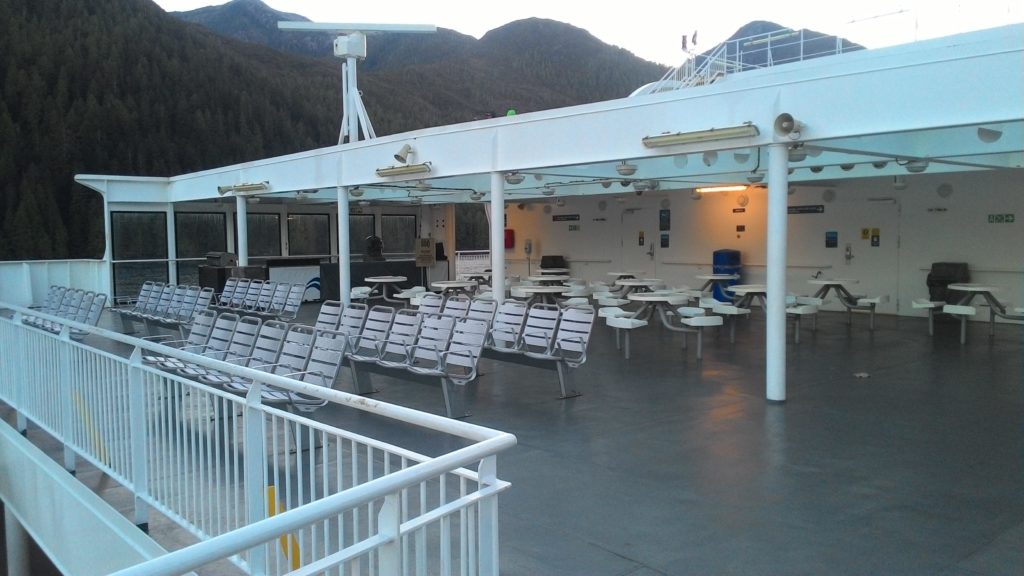 More or less in time, we departed Port Hardy at around 7:30 am. The weather was still quite cloudy, so we could not see that much of the islands we were passing. I spent the time planning my upcoming trip through Northern British Columbia and Yukon a bit more in detail. While doing that, I also got to know Thomas and Dina, a German couple from Munich and chattet with them. They were going just to Bella Bella for the sake of the ferry ride and would thus get of the ferry at around noon. We talked about the trips we have done so far, traveling in general and the work and life back there in Germany. We also spend some time out there on the sun deck once the weather cleared up a bit and later even spottet some whales together. One of them was actually weaving at the ferry for a couple of minutes – no joke!

At around 10 or 11 am, the weather had cleared up completely and revealed the beauty of the Inside Passage we were traveling along. It was already incredible and we were just at the beginning of that great journey. About an hour before arriving at Bella Bella, the crew even prepared some barbecue on the sun deck. I got myself a Bratwurst – they really call it that way here – and spent the rest of the time to Bella Bella with Thomas and Dina on the sun deck. In between my name was called via the intercom and I was informed that in Bella Bella I had to rearrange my car on the car deck since I was blocking a trailer that had to disembark there. We arrived at Bella Bella around noon and there, Thomas and Dina left the ferry. Since I had to be on the car deck anyways, I said goodbye to them there once they actually disembarked.

On my own again, I spend some time on the upper deck watching the scenery around the ferry dock. We spend about half an hour there while the loading officers were unloading the cars and trucks. Around the ferry dock there was some wildlife to watch: Otters (which I unfortunately did not see), eagles, and flying fishes. I even watched the departure from the upper deck and then went down to explore the ferry a bit. It was a huge ship with a lot of ammenities: Several seating areas you could choose from, a cafeteria, and even a restaurant. I got some hot water in the cafeteria for my instant noodles that I brought for lunch.

Eventually, I got to know one of the crew members, a young man who obviously enjoyed the life working aboard the ferry a lot. We worked there in two weeks shifts, so two weeks living on the ferries, and two weeks off from work. In that time off, he was always traveling, so we had some stories to share and chattet a bit about different places and the life of traveling.

I basically spent the rest of the entire trip somewhere on the upper deck of the ferry and just returned to my seat from time to time. The entire scenery we were traveling through was just breathtaking! Was passed narrow fjords in the middle of nowhere. The entire landscape consistet of forest. From time to time, the captain announced some whales we passed and I was even able to see some of them. It felt just a bit surrealistic smoothly traveling through that huge area of nowhere – I can hardly express it in words here! It definitely felt great as an opening for my trip through the more remote areas of Canada and Alaska!

At several points of the passage, we passed some important points which were then always announced by the crew and which were also described on a map of the trip you could get from the central information desk. A couple of times those were lighthouses, once a abandoned little town of a sulfur mine of which only a chimney remained, and another time it was a fish hatchery which was still in operation. As often here in Canada, the journey was well prepared and a lot of information was given. 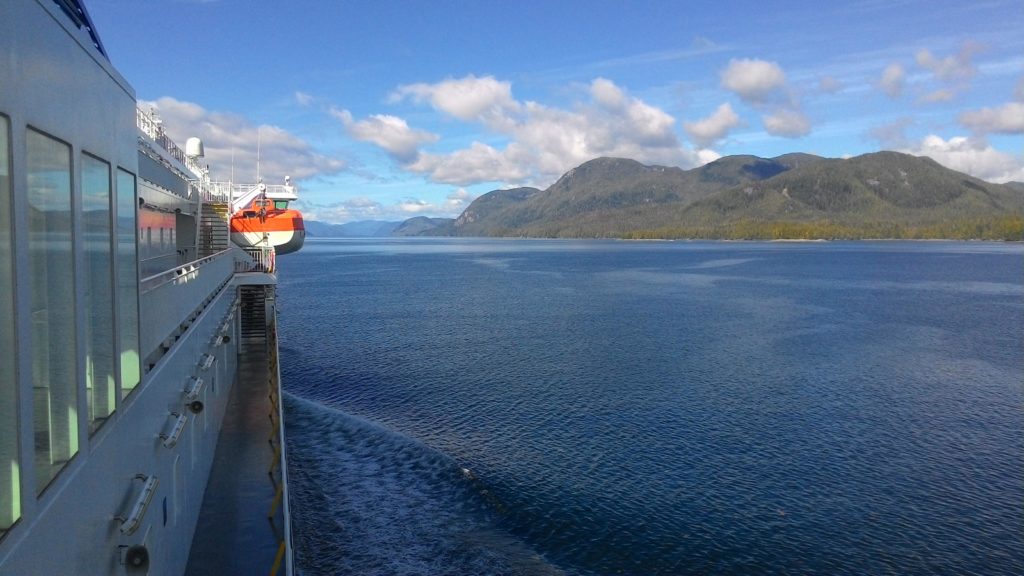 Shortly before sunset we reached the last one of the important points of the passage: A really narrow fjord we were traveling along with walls of mountains on each side. It was definitely an experience to float through that passage on such a big ship! 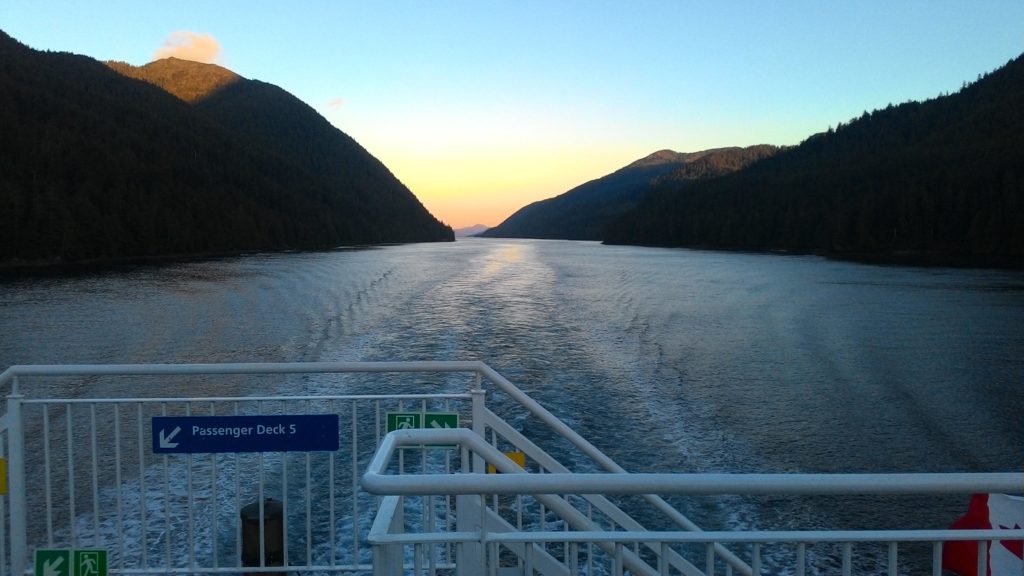 Once the sun was gone, it became cold on the outside deck quite quickly. So I returned to my seat indoors and also to the cafeteria where I had my second portion of instant noodles 😉 and chattet a bit more with that crew member, I had got know earlier.

At around 23:30 pm, we arrived at Prince Rupert and together with all the other passengers, I disembarked the ferry. Since it was already late, I simply tried to find a spot to stay overnight, which turned not to be that easy as I thought. All the parking lots of Walmart and other supermarkets were marked with “No overnight parking” signs and I didn’t really want to violate that directly. However, I also didn’t want to go to the local RV park just for staying the night. I would not have used any of the ammenities there anyways. Finally, I noticed two RVs just parking on a McDonald’s parking lot. I talked to them – they were Swiss and German people – and in the end, it was me asking at the McDonald’s drive through if we could stay the night here. That was approved and so I once again found a spot to stay the night for free ;-).