Today, I wanted to continue to Stewart, the bordering town of Hyder, a little ghost town in the southern most tip of Alaska just aside of British Columbia, Canada. After breakfast and some little chat with my neighbor the Australian guy, I departed from the Meziadin Provincial Park campground and drove the missing kilometers to Meziadin Junction, the cross road of highway 37 with highway 37A. There, I wanted to fill up my car. As usual, I got out of the car, opened the gas tank valve and my purse … and then the shock: My credit card was missing!

I started to empty and search the entire purse. I searched the car and any other location within the car that I imagined I might have put the card. But then it became clear to me quite quickly: I must have left the card at the gas station in Terrace where I filled up the last time just before driving all the way up here through the Nisga’a territory. Terrace was about 250 kilometers away from here – driving there and back here would sum up to about 6 hours on the road.

Before just heading down there, I wanted to confirm that the card had really been found. So I entered the little shop at the gas station, explained my situation and asked for a phone. Yes, I do have a smartphone, and I even do have a Canadian SIM card, but out here in the wilderness there was no cell phone signal at all. The woman in the shop explained me that it might be “more expensive” as the phone is linked via satelite, but she could not tell me what “more expensive” means. When I heard “satelite”, I already expected horrible fees… But it did not help, I had to confirm that the card had been found and otherwise block it as quickly as possible.

I gave the women of the shop a generous tip, quickly filled up my car sufficiently – the gas prices out here in the wilderness are horrible – to reach Terrace and started my drive back there.

After about 2 hours and a half, I arrived at Terrace even a little earlier then expected. The calculation of driving times of MapsMe are not always accurate. I picked up my credit card and directly filled up at that gas station again. Then – since I was unvoluntarily back to the city – I quickly went to Walmart and bought a salad for later. In my opinion I deserved a bit of a relief for all that desaster, so I also went to Dominos Pizza and got myself a chicken barbecue pizza for the way back. Then I started to drive all the way back to Meziadin Junction and Stewart respectively.

The entire trip was about 500 km long – so in fact I almost went once from the east to the west of Germany to pick up my credit card! But what should I have done in that situation? I was simply happy that I had my card back!

I arrived at Stewart at around 4 pm, quickly filled up my car there as the gast was much cheaper here than out there at Meziadin Junction, and – with a short stop at the information board in front of the visitors center – drove down to the border crossing into Alaska and the ghost town of Hyder. There, I directly went to the Fish Creek Wildlife Observation and when asking about the entrance fee, I was told that there was a grizzly bear right now down at the river! So I hurried to park my car, get my camera, pay the entrance fee, and go down to the boardwalk. And yes, there it was: A huge grizzly bear being busy with catching salmons! In fact, it was not really catching any fish. The entire river was full of living and already dead salmons which had arrived here at their birthplace to drop their eggs. And that was exactly what that grizzly bear was after for: The eggs of the salmons. It basically “opened” one of the already dead salmons after another and just ate the eggs – in other words: Grizzly bear’s salmon caviar! 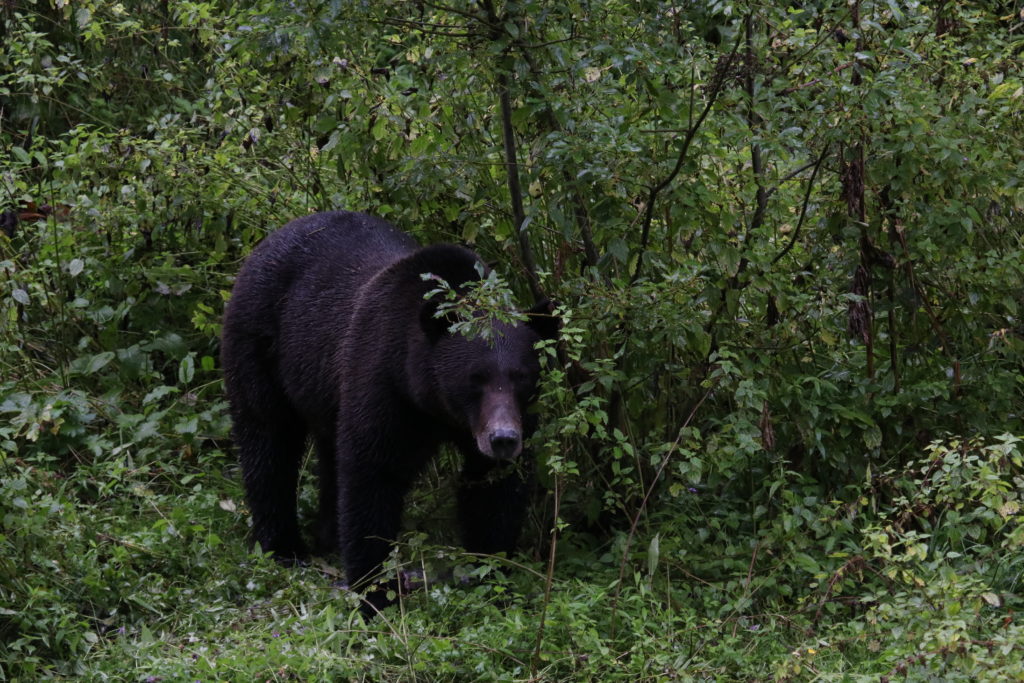 Together with a good number of other tourists, I watched the grizzly bear for a long time. It even presented some show to us. After a while of feasting on the salmon eggs, it obviously had enough and needed some sleep. So it was preparing itself a bed – no joke – by collecting grass at the shoreline of the river. Once finished, it lay down and really seemed to try to catch some sleep. It was obviously annoyed by the noise of the seabirds around here. But still, it seemed to sleep for a while and we tourists were simply watching. After a while, the grizzly obviously had slept enough and started to wate around the water again searching for some more salmon caviar. The entire show was absolutely surrealistic! If anyone would tell me that story, I would for sure not believe him. But you can be sure: It’s true – it really happened exactly that way!

Somehow it was really difficult to leave the spot and the grizzly bear behind. Even though I had already spent a lot of time here and it was constantly raining a bit. But it was just so much fun watching that grizzly bear and I also got to know a group of Germans from Aschaffenburg who were traveling three weeks in a rental RV.

Finally, the bear seemed to take the burden of the decision to move on off us and slowly walked upstream the river and step by step out of the perfect view from the wooden boardwalk. With that, I managed to leave the area and said goodbye to the group of Germans. They also planned to drive up to the Salmon Glacier and even wanted to stay overnight there. That sounded appealing to me and I mentioned that I was thinking of going up there, too. They promised me some beer in case they would meet me up there again ;-).

And who am I that I would not accept the adventure of driving the gravel road up there with the intention of staying overnight? So I started driving towards the first view point. Unfortunately, it was quite cloudy, so there was almost no view at all. I continued the road further up and even after the main view point downhill again as the Australian guy on the Meziadin campground had told me that from a point beyond the main view point, you could see the glacier from below the clouds. Unfortunately, that was not true for tonight. The entire mountain seemed to be within the clouds and I could only spot the glacier through some tiny wholes in the clouds. So I decided to drive back to the main view point – and met the group of Germans there.

They were looking for a particular spot which was mentioned in a flyer they had taken from the visitors center down in Stewart. Together we figured that that spot must be the main viewpoint where we just were at that moment. So we decided to stay here and parked our RV and car side by side. We then had some beer while two of them were preparing dinner. I was even invited for dinner within the RV. After dinner, we played Wizard altogether until about midnight.

Finally, I went back to my car and quickly into my sleeping bag as it was already freezing cold up here! With that, a very ambigous day ended: First the entire desaster about the credit card and then the incredible show of the grizzly bear which I never had seen a free one in the wilderness before! This was definitely one of those days on which the worst and the best things of traveling happen shortly one after another!

One thought on “A Fateful Day”