Once again, I slept well – even if a bit short – on the McDonald’s parking lot. After getting up, I even had a washroom available ;-). Since I didn’t want to stress it too much, I just used it quickly and went away – to a Tim Hortons where I used the washrooms for the rest of the morning ceremony and got myself a coffee. I somehow didn’t want to set up my entire cooking facilities in the middle of the city ;-).

After the shortened morning procedure, I set off on highway 16 towards Terrace. The drive was beautiful, the highway followed the fjord and I stopped a couple of times to take pictures. 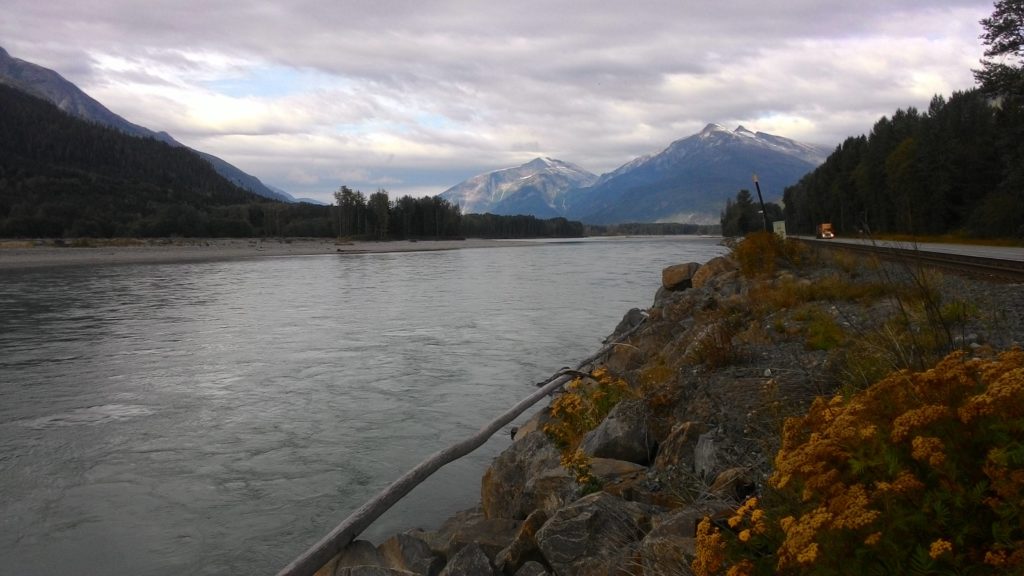 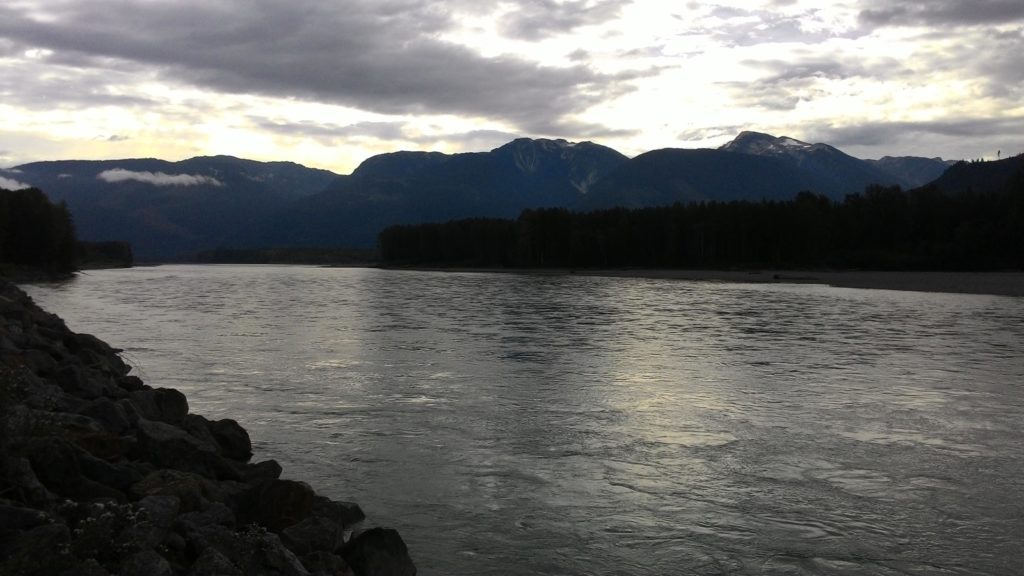 After about one hour and a half, I arrived the small town of Terrace. There, I found a Walmart where I could even complete my morning ceremony more completely and filled up my supplies a bit. Then, I went to the local visitors center since I was still unsure whether to continue the faster route on highway 16 and highway 37, or to take the route via Nisga’a highway through the Nisga’a native reserve and visit some places there on the way. The attendants in the visitors center right away recommended me option two and provided me a whole set of information about that route and what to do there. They even recommended me to drive all the way down to the native town of Gingolx – even if only for having fish and chips there. They were so enthusiastic about that route that the decision was made quite quickly.

I filled up my car at the gas station just behind the visitors center and left Terrace on the Nisga’a highway northbound. I passed the town of Rosswood, which actually was not even a town and finally reached the entrance to the Nisga’a native reserve. Actually, the area is not really a reserve, but a provincial park run by both, the Nisga’a natives and the BC parks association. The Nisga’a have their own government here, so it’s just like a native reserve. 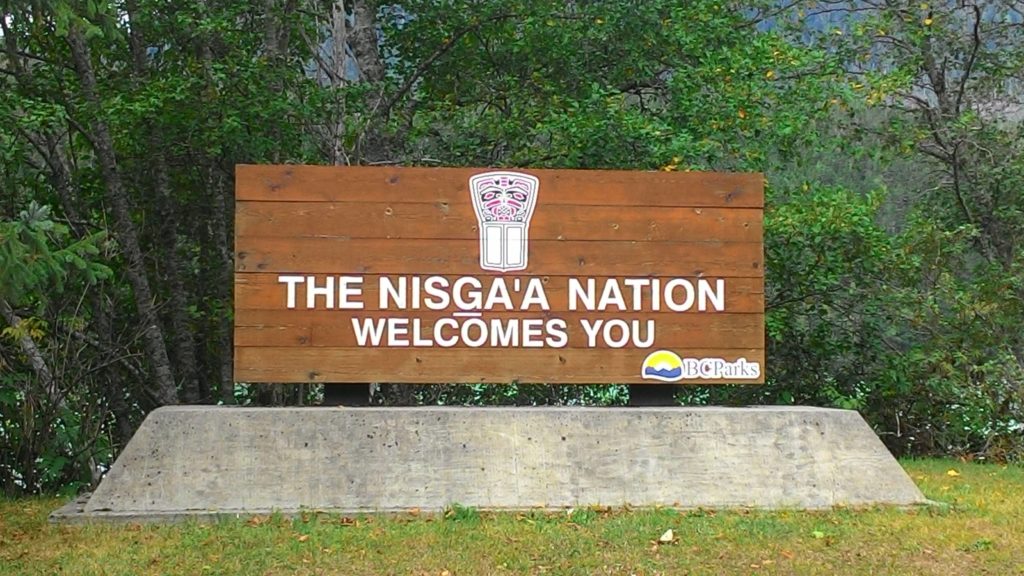 In the visitors center, I was provided with a flyer describing an auto tour. Every couple of kilometers, there was a site marked with a sign and some explanation given for it in the flyer. I followed the Nisga’a highway and stopped at the dedicated locations. The first one was at a beautiful lake with a glacier in the background. Of course, I had to stop here to take pictures! 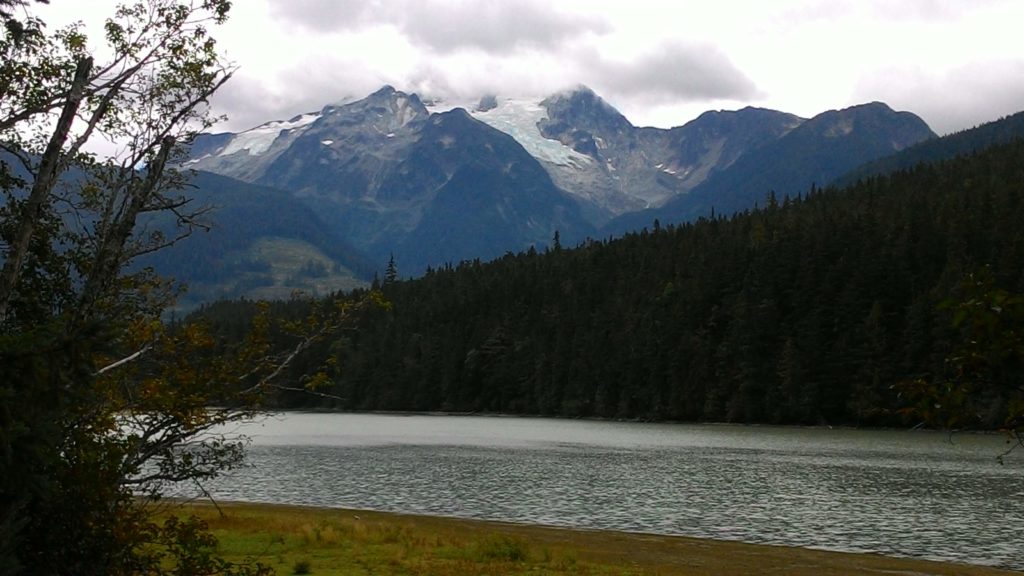 The second stop was a short path leading onto the lava bed of the 1775 erruption of the volcano in this area. Actually, this erruption killed almost 2000 of the Nisga’a native people who lived here by that time. Further stops included two waterfalls and a small lake, which were all three not that impressive. Finally, I reached the park’s visitors center where I got some explanations about the catastrophic event of the volcano erruption and about the Nisga’a culture and language. The information were given by a representative of the Nisga’a people which was quite interesting. It’s beautiful how the Nisga’a people manage to preserve their culture here even though most of them today of course live and work like any other Canadian.

Further on the tour was one of the Nisga’a villages and a stop with a short walk over the lava bed to a so-called tree cast, which is a lava formation formed by hot lava flowing around a tree and eventually burning that tree. When the lava cools down, a perfectly shaped round whole in a lava rock remains. 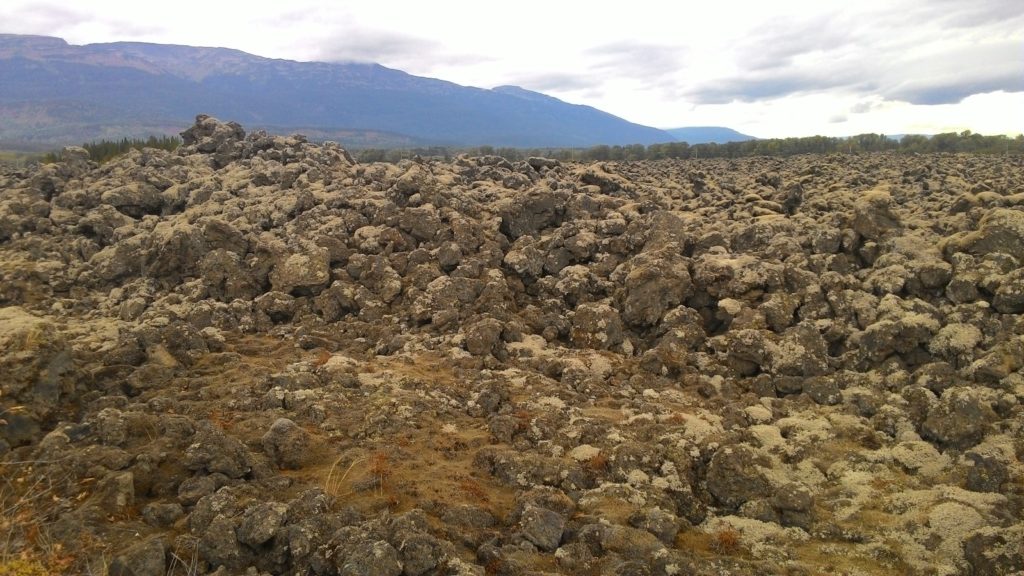 After those two stops, I followed the advice of the attendants in the visitors center in Terrace and followed the Nass Road further east towards the Nisga’a village of Gingolx. On the way was another Nisga’a village and a museum with artifacts about the culture of the Nisga’a people. However, since I’m not that much into museums, I did not enter. It was anyways already much later in time that I thought and I still wanted to cover some distance today towards Stewart. However, I continued the drive down to Gingolx – and was almost disappointed. 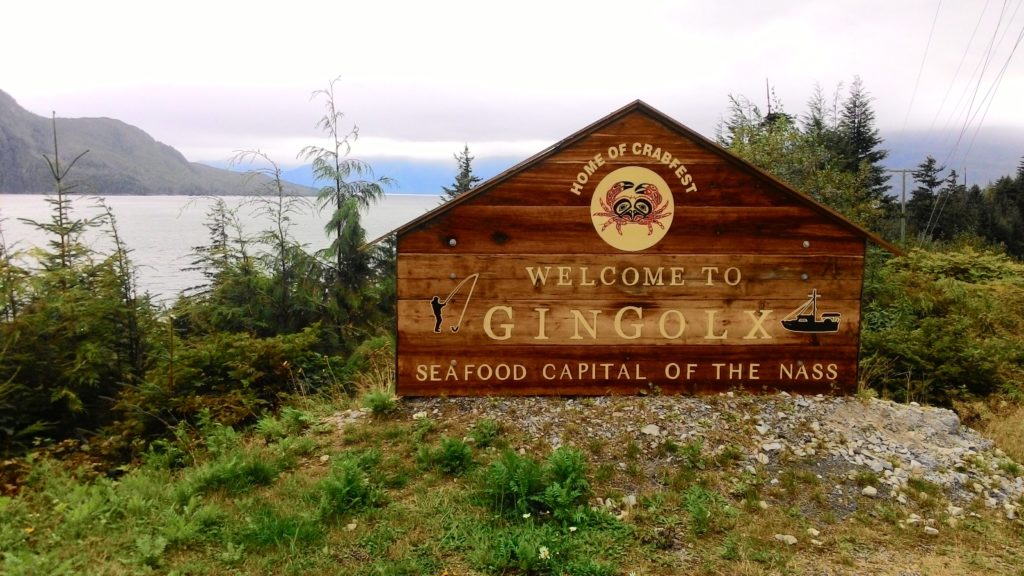 The first – and on the first glance the only – seafood restaurant was closed. I three other Canadian tourists who were also looking for the seafood restaurant for getting fish and chips. They finally managed to find it and driving around I saw them stopping in front of a building. So I also entered and indeed we got fish and chips in a kind of groceries store. I enjoyed my fish and chips sitting in the car at the waterfront of the village. Actually, the fish and chips were quite delicious – or I was simply too hungry! 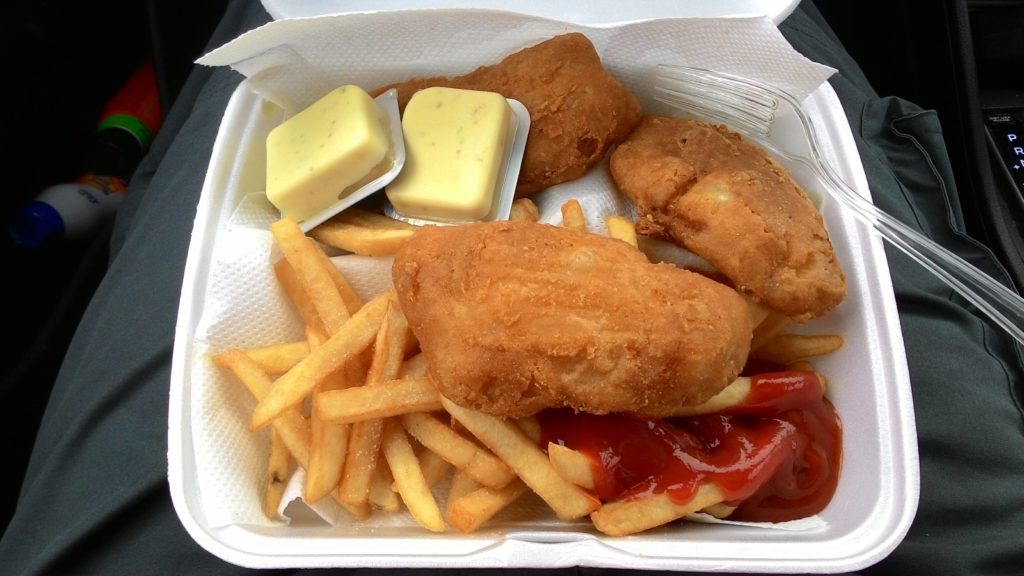 Apart from that “attraction” there was actually really nothing to see in the village, so after finishing my dinner, I started driving again all the way back on the Nass Road.

Unfortunately, the only gas station in the village of New Aiyansh was already closed when I arrived there, so I had to continue without filling up again. From that village, I turned onto the Nass Forest Road which was a gravel road, the attendants in the visitors center in Terrace told me some “horror stories” about. But that’s anyways my experience so far: The locals make a big thing out of the driving on those gravel roads. Well and yes, of course, you have to go much slower than on a normal paved highway, but on the other hand it’s also nothing that bad.

On my way on the Nass Forest Road, I even witnessed one of the locals turning with his oversized recreation trailer on that narrow forest road. He simply pulled the trailer back into the woods, turned the car around and drove away in the oposite direction – just as if it’s nothing special to drive with such an oversized combination on a road like this. So this does not really match with all the concerns the locals seem to have about the gravel roads.

Eventually, I reached the junction of the Nass Forest Road with the highway 37 towards Meziadin Junction. Since it was definitely too late already to reach the city of Stewart just at the border with the most southern tip of Alaska, I decided to stay on the Meziadin Provincial Park campground where I got to know and chattet a bit with an Australian guy who was on a road trip with his motor bike.

Since I had my fish and chips already, I was almost ready for bed. So today, it was quite easy to get ready and I went to bed when it started to get dark.