Today, I actually wanted to drive all the way to Whitehorse – but again, plans are good until reality meets them ;-). Which is by the way especially true when traveling…

I woke up at around 6:30 am since I had left the roof window of my car uncovered in order to wake up with the first daylight. I definitely wanted to see that glacier which completely covered itself in fog and clouds yesterday. However, this morning it was no difference. I could not see a small part of it. It actually reminded me a lot to my trip to Costa Rica where I drove all the way up to a volcano with my rental car just to see a white wall of fog :-(.

Well, I first had breakfast – and especially coffee to warm up a bit as it was freezing up here – and then used the waiting time for improving weather conditions by writing some blog posts offline which I would publish later once there was cell phone signal again. With that passed the time and by around 10 am the situation had not really improved in any way. So I made the very difficult decision to leave and forget about the glacier on this trip…

I woke up my German neighbors and said goodbye to them. They were not that much in a hurry and wanted to wait here until the fog would clear up. I then started my decent down to Stewart. Only a few kilometers further down, I catched a glimpse of the glacier. Down here, the clouds were way not that bad than up there. I decided to return and inform my friends about this finding and then continue decending on the other side of the main viewpoint again to maybe catch a better view from there.

On my way, I met another Swiss woman who I had been talking to yesterday while watching the grizzly bear already. Together with her friend she was on her way to find a good spot for painting the glacier and the landscape surrounding it. She was actually living in Canada and was pretty positive that it would clear up later…

… and actually she should be right and I am so thankful that I made the decision of returning back here! Down here on the other side of the main viewpoint I could see the entire glacier quite clearly! I was even able to decent a rough road by car and walk the final part almost all the way to the edge of the glacier. I spent some time there taking pictures and trying to get some HDR-ready shots which I would hopefully render into amazing pictures back at home. 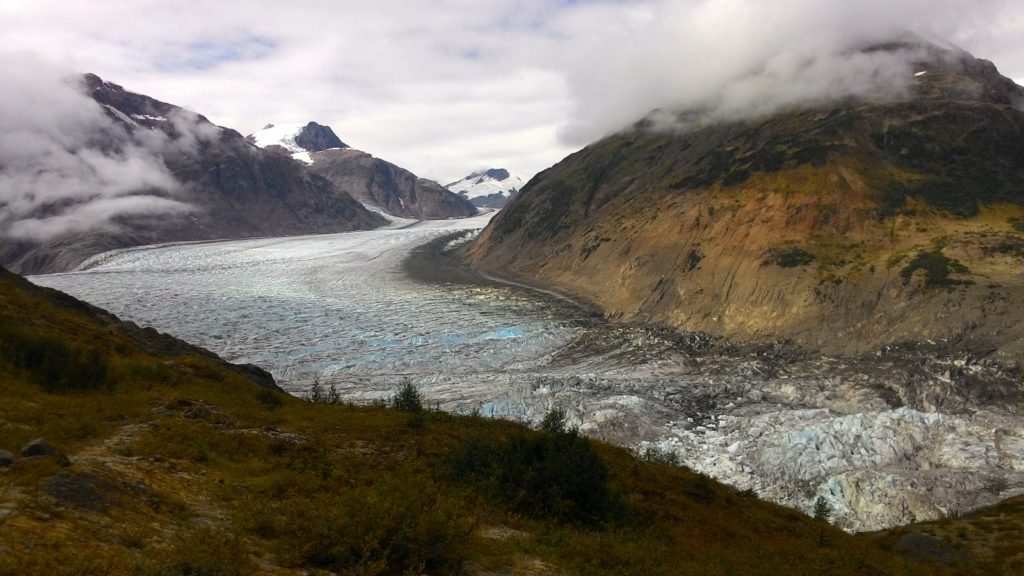 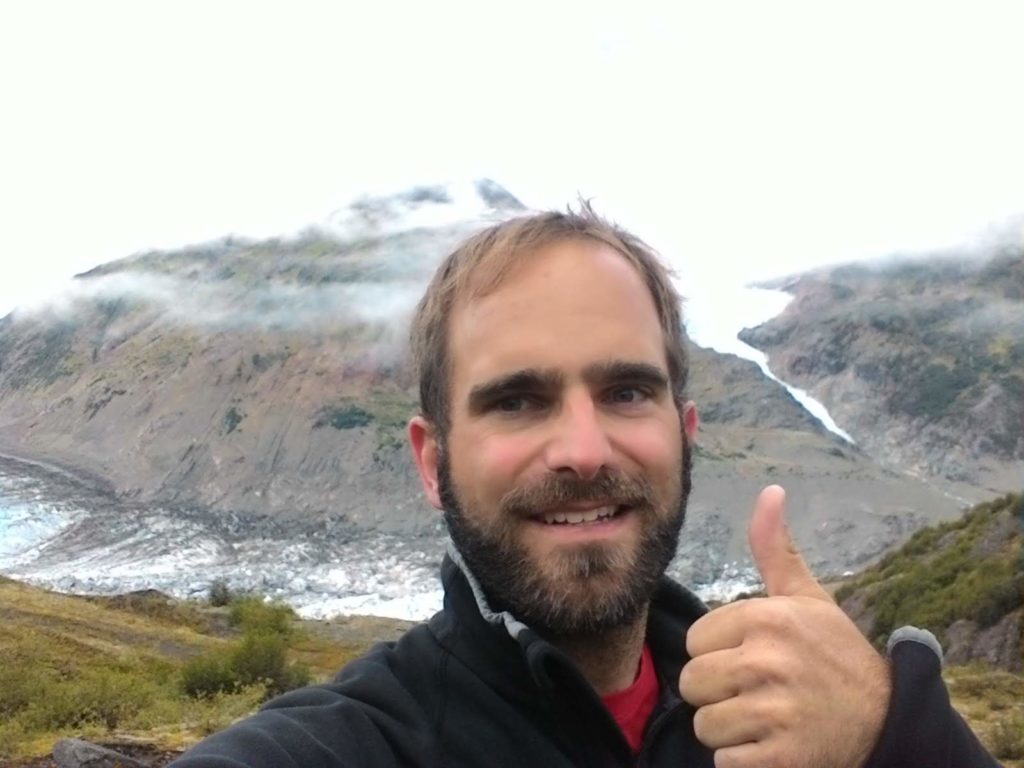 Again it was quite hard to leave, but I also knew that I had to keep the time a bit in mind since I still wanted to move on to Whitehorse today. When I reached the main viewpoint on my final way back to Stewart again, my German friends were still there and they told me that they had seen the glacier from up here, too. In the same time when I had been down there on the other side, it had obviously cleared up here, too. Unfortunately, it had become foggy in the meantime again. Mona showed me some of her pictures and encouraged me to stay a little more and wait if it would clear up again. And after having seen her pictures, I simply had to wait…

… and again that was the right decision. Just about half an hour later, the clouds clear up again and revealed the view on that amazing glacier just below us! Of course, I also took a lot of pictures and simply enjoyed the scenery. From time to time, the glacier covered itself again in clouds just to clear up again a few minutes later. When it was clear the view was just breathtaking!!! Sorry, the pictures are still on my camara only in RAW format, so I can’t directly post them here.

I probably spent another two hours up here together with my German friends. In parallel we chattet, took pictures together and simply enjoyed the view. Then, when another series of clouds covered the glacier, I finally managed to leave and started my final decent down to Stewart. On the way, I stopped a couple of times to take even more pictures of the glacier which was visible from further down again. There, I met that Swiss womand and her friend again and even my German friends followed me and we again spent some time together watching the scenery. 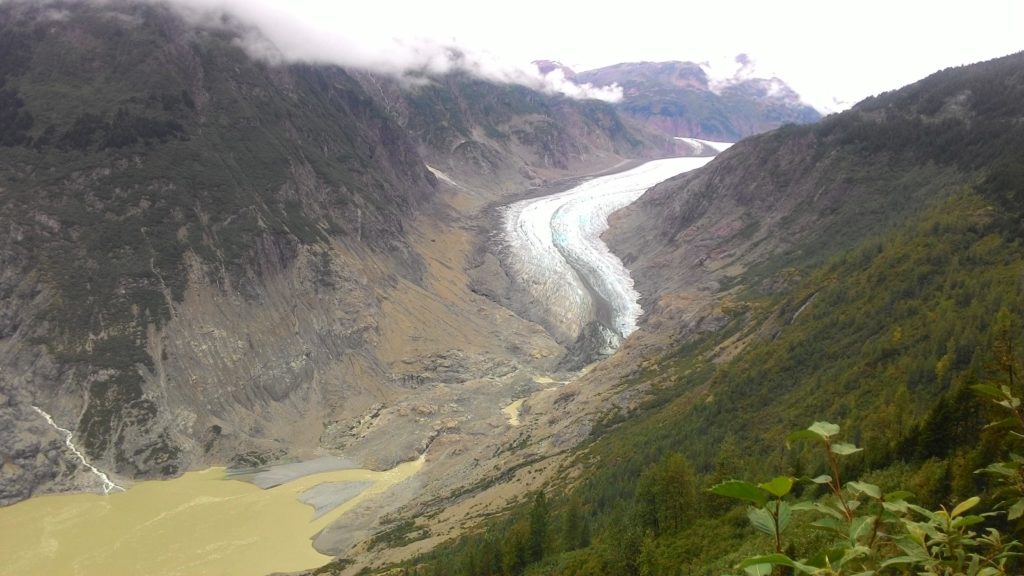 At around 3:30 pm, I finally arrived back in Stewart. I filled up my car, used the cell phone signal for some blog posts and WhatsApp messages, and finally started driving back to Meziadin Junction and further up north towards the Yukon.

And then, while driving on the highway 37 it suddenly happened: There was a black bear just on the other side of the road. Unfortunately, I was not fast enough and with my hard braking, I seemed to frighten it and it went way into the woods. I tried to turn around and find it again, but it was definitely gone and I had not even taken any pictures :-(.

However, I did not have to wait that long… just a couple of kilometers further down the road, there was another black bear again, this time even on my side of the road. Unfortunately, the same story repeated: I was too fast and hit the brake too strongly and frightened the bear way.

But somehow, it seemed I was unlimitedly lucky today: Another couple of kilometers further down the road, there was the third black bear and this time, I managed to react in a better manner. Obviously it was much better to just pass the bear at a good driving speed and stop after passing it. This time, was able to take some pictures! However, I had to figure out the best configuration of my camera to make sure they were not too dark, but also sharp enough as the bear was of course moving.

To gain some practice, I even got two more chances further down the road. Once it was a female black bear with two little baby bears, and the final one was just one black bear again. The female one with her babies was of course a lot more shy, so I unfortunately had to keep a way larger distance and could only take some pictures from there. But I could watch them for a couple of minutes! It was just amazing!

Of course all the stopping for the bears had finally ruined my time schedule and there was no chance to reach my destination campground at Boya Lake about half way to Whitehorse. However, the bear watching was definitely worth it! This is one of the reasons why I came to Canada: To see those amazing animals in their natural habitat! I’m so happy that it worked out this time – and even five times on just one single day!

I continued my journey until it became dark. Then I parked in a pullout area directly at the shoreline of a small lake together with two other RVs and one car, finished some blog posts and finally went to bed completely happy about what I had experienced today!

One thought on “An Incredibly Beautiful Day”