Since with the desaster with my credit card and the beautiful glacier views, I spent much more time in the region of Stewart than I originally planned, I scheduled a full day of driving today to get closer to Whitehorse. In fact, I actually planned to reach Whitehorse today which was quite optimistic since that was a 750 km drive!

However, I tried to get started as early as possbile – with the hope of maybe seeing another bears or other wildlife in the dusk. I followed the highway 37 further north and tried to use the washrooms at Iskut for a partial morning ceremony. Unfortunately, the pit stop there was still closed. So I had to go on to Dease Lake and use the washrooms there. Luckily, I had filled up the car in Stewart so I did not have to use the gas stations on the way which were horribly expensive. I mean, no wonder out here in the wilderness! Those pit stops were basically a gas station and a little shop – nothing more.

And then – I just came around a corner not thinking anything in particular – there was a caribou standing in the middle of the highway. When I slowly approached it, it seemed to check a couple of times whether I was a threat or not. It started to walk away, but then stopped and just stared at me. Obviously, it was unsure about me and the threat. And I mean, I’m not a threat! I was just shooting at it with my camera and the huge zoom lens ;-).

Eventually, the caribou left the road and I continued driving up north. At around 10 am, the light of the morning sun was putting a beautiful atmosphere on the entire landscape I was driving through and I simply had to play around a bit with pictures and videos of myself being on the road in the middle of the wilderness. Unfortunately for you, my readers, those pictures are again on my camera in RAW format.

And then I reached the border between the provinces of British Columbia and the Yukon. I had officially reached the very northern part of Canada! At the junction with the Alaska highway, I followed my guidebook and turned right towards Watson Lake even though Whitehorse was located in the opposite direction. Watson Lake is considered the gateway to the Yukon and I wanted to get some adviced in the visitors center there.

Just a few kilometers before I reached Watson Lake, there was a hitchhiker at the highway. First of all, I pointed to all my stuff in the car and passed him – but actually with a really bad feeling. It had happened to me once or twice already that I had to passed hitchhikers since my entire car was blocked with stuff. In the back, the seats were lowered providing my dormatory and loading space. And the front seat was also used as loading space. Each time, I had to pass a traveller hitchhiking, I felt bad since from outside one could only see me in the car.

This time, however, I redecided and turned around a few kilometers further down the road and returned to the spot were I had passed the hitchhiker. I offered him to take him to Watson Lake if he could somehow squeeze on the front seat without having to unload all the stuff there. Of course, he agreed and so I had a travel buddy for about 15 kilometers. He was Canadian and on a hitchhiking trip through the entire country. Now that he had spent some time on the west coast of Canada, he was on his way to the east coast.

In Watson Lake, I dropped my passenger and returned to the visitors center. There, I got some valuable information about the route I had in mind taking me to Whitehorse first, then down to Skagway and Haines in Alaska and then up via Beaver Creek again into Alaska and to Dawson City back in Canada via the Taylor and Top-of-the-World Highway. The staff in the visitors center actually adviced me to do the loop trip the other way round. The reason was that the ferry crossing the Yukon river in shortly behind Dawson City might stop operation due to ice coming down from the arctic already. And once the ferry stops operation, the U.S. also close their border crossing in Little Gold – and then the Top-of-the-World Highway was interrupted. However, I had the ferry from Skagway to Haines already booked yesterday!

Another thing the staff in the visitors center told me was that the Dempster Highway was in pretty bad shape this year and further up north even already difficult to use for some early snow in that area. This information was some kind of relief for me: I would have really liked to drive the Dempster Highway up north at least until the arctic circle – but I simply did not have enough time! So getting to know that even if I had time, the drive would most like be impossible to manage felt somehow good.

After all those information, I went back to my car and digested them. I checked if I could cancel the booking of the ferry from Skagway to Haines to do the loop trip the other way around as suggested by the staff in the visitors center. In the end, I stick to my plan and just shifted the ferry ride one day ahead to reduce the rush I currently felt I was in to.

Before hitting the road again, I checked out the Sign Post Forest which was really funny to walk through: 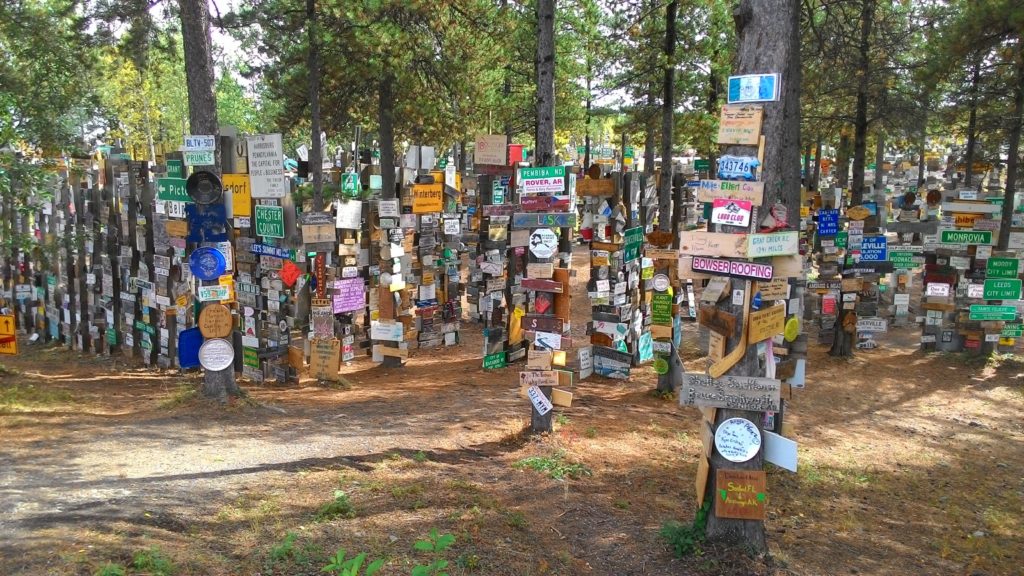 I stopped once at the Continental Divide and walked the short trail down to the Ranchera Falls which were beautitful, but also nothing that spectacular.

The rest of the drive nothing special happened. Just the atmosphere became quite beautiful again in the late afternoon sunlight. Shortly after passing Teslin and Johnsons Crossing – were I bought two of the world famous cinamon buns – I decided to interrupt the drive and spend the night on a rest area. Once again, I was not the only one having that idea. There were three huge RVs and recreation trailers and one truck on the parking lot already. Most of them were even running their generators and were obviously prepared for an overnight stay. I parked my car a bit away from them and spent some time writing blog entries. Then, I went to bed as I was quite tired due to all the driving today.